The Bold and the Beautiful returns on Monday with an all-new episode as Bill (Don Diamont) tries making sense of Liam’s (Scott Clifton) to Katie (Heather Tom) while Wyatt (Darin Brooks) tries helping Steffy (Jacqueline MacInnes Wood) get over Liam.

Read on for B&B’s Monday, February 8, 2016 spoilers and be sure to check back for after-show recaps. 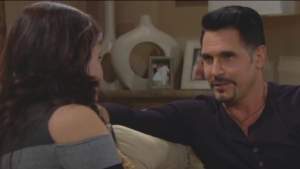 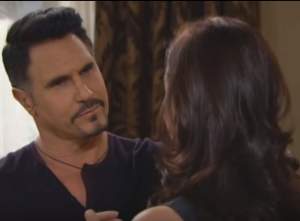 A brunt of Bill’s time lately has been spent listening to Katie vent about her disappointment with Brooke (Katherine Kelly Lang). Unbeknownst to Katie, Brooke’s feelings for Bill are mutual. Nonetheless, he continues playing the loving husband to her.

In Friday’s episode, Bill and Katie wondered just where Liam was. Quinn (Rena Sofer) — pretending to be Liam — sent Bill a text saying he needed to get away and clear his head. Meanwhile, Liam now thinks that he’s married to Quinn and Quinn’s name is Eve.

On Monday, Bill discusses his son’s personality traits with Katie. He acknowledges that while Liam is a good judge of character, he’s never really been good at understanding women.

“My son does have pretty good instincts about people, except when it comes to women in his life.”

Per the usual as of late, Katie goes on and on about Brooke’s betrayal. She now questions herself as to why she thought it was a good idea to bring her sister to Forrester Creations in the first place.

Will Bill begin to sense that something’s seriously wrong with Liam, or will Quinn continue to fool his peers into thinking his disappearance was his decision?

“Anyone can see that inviting Brooke to work with us was crazy, I can, I can see it in, in people’s eyes. When I would suggest it. I can see it in your eyes.”

Will Katie find out about Bill’s reciprocated feelings and kiss from Brooke, or will he continue staying in Katie’s her good graces? 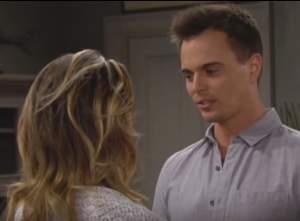 Meanwhile, Wyatt — who Steffy keeps acknowledging as reliable — continues trying to get Steffy to fully commit to him. Although he’s made some serious leeway in the form of her compliments and kisses, she still continues to reminisce and wonder about Liam. The two have gotten extremely close, but not enough for Steffy to completely lose hope for Liam.

On Monday, Wyatt persists with his advice to Steffy about Liam. Steffy — unclear of what she wants — expresses her confusion to him. In response, Liam gives her some advice.

“The most important thing a person can learn in this world is what they want.”

Will Steffy finally give up on Liam and give Wyatt her undivided attention, or will Wyatt’s constant smothering of Steffy lead to her backing off? Stay tuned.