The Young and the Restless returns on Monday with an all-new episode as Nick (Joshua Morrow) continues with himself and Sage’s (Kelly Sullivan) plan for him to get closer to Dr. Anderson (Elizabeth Bogush).

Dr. Anderson to Make a Shocking Confession to Nick 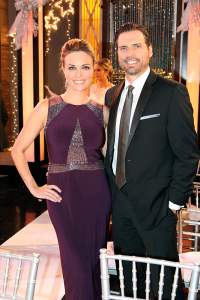 Pictured left to right, Sage and Nick Newman, during happy times in 2015. (CBS)

Nick — shown in a January 27 scene with Dr. A above — and his wife Sage have surely had their relationship troubles over the past few months. However, they’ve since patched things up and their prior predicament now pales in comparison to what their up against with Sage checked into Fairview.

Dr. Anderson has continued to put her nose in Nick and Sage’s business, attempting to drive a wedge between them. Early on, her plan seemed to work. After treating Sharon (Sharon Case), Dr. A has increasingly tried to keep Nick away from Sage and Sage away from baby Sully (technically, it’s really baby Christian). But as time has gone on, Sage, and now Nick, have gotten more fishy.

Unbeknownst to Nick, Dr. A. is someone he knew very well in the past, as he had impregnated the teenager. In a Newman Ranch diving accident, Dr. Anderson — then named Sandra Allen — broke her neck. In the process, she not only lost Nick’s baby, but the ability to ever be fertile again. Making matters more complex, Nick never knew Sandy was pregnant in the first place.

According to Celeb Dirty Laundry on January 31, Nick “will grow closer to Dr. Anderson and build her trust. Everything will run smoothly on Nick’s end until Dr. Anderson’s stunning confession shakes things up.”

Meanwhile, Sage — who’s committed to exposing Dr. A. at all costs ¸— continues undergoing psychiatric treatment in Fairview; a situation that concerns both Nick and self-proclaimed friend, Adam (Justin Hartley). Nontheless, Sage insists that her cover isn’t blown, even if it means being medicated.

Will Dr. A confess to Nick that she’s a teen from his past and he impregnated her? Y&R fans should get a clearer indication of how it will pan out this week. Stay tuned.