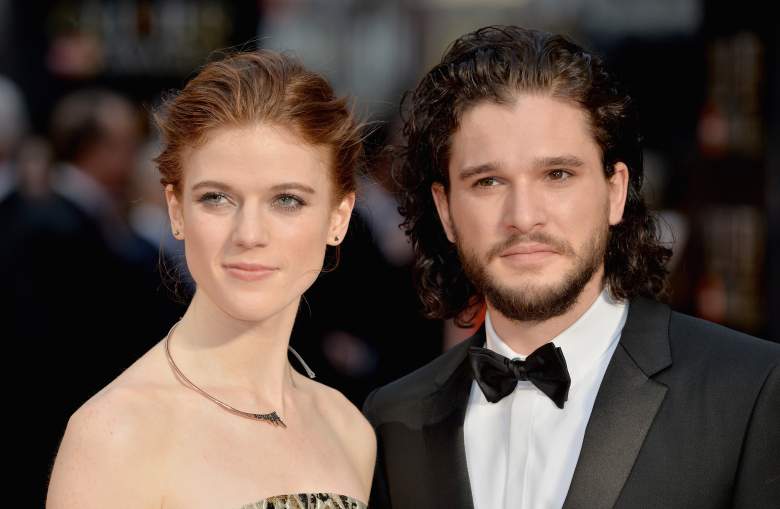 Leslie and Harington took their relationship public for the first time walking the red carpet at the 2016 Olivier Awards. (Getty)

Kit Harington and Rose Leslie are engaged, a source told The Sun on Tuesday, September 27. The couple has neither confirmed nor denied the news.

“They’re yet to set a date, but told friends and family last week that they’ve got engaged. Kit’s known for ages he’s wanted to marry Rose but he wanted them to get a house and settle down a bit first. After moving in together in January he felt it was the right time to take the next step,” the source said.

This certainly isn’t the first time that engagement rumors about the two have surfaced, either. And with Leslie’s new role in The Good Fight upon us, the timing of the rumors is a bit suspect. The couple is indeed still dating, however.

1. Harington & Leslie Made Their Relationship Official at the Olivier Awards Red Carpet in 2016 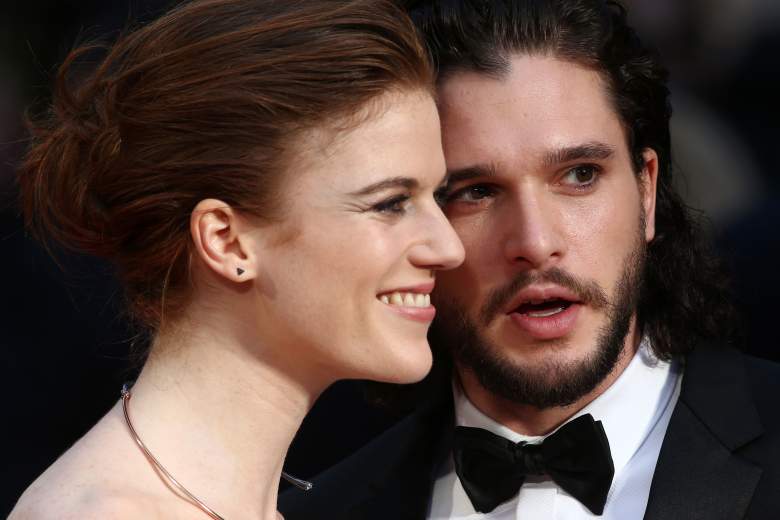 Harington and Leslie stayed close during their walk down the red carpet, showing off their romance to the cameras. (Getty)

The former Game of Thrones stars first stepped out together, walking arm-in-arm down the red carpet, at the 2016 Olivier Awards.

Harington, 29, and Leslie, 29, didn’t try to hide their affections while attending the event held at the Royal Opera House in London on April 3. They posed for the photographers with their arms linked behind each other’s backs and, at one point, the couple even stole a kiss.

Harington looked dashing in his tuxedo while Leslie wore an elegant Malene Oddershede Bach gold gown. Although the couple attended the awards ceremony, they were not nominated for anything.

2. They Starred Together on ‘Game of Thrones’ 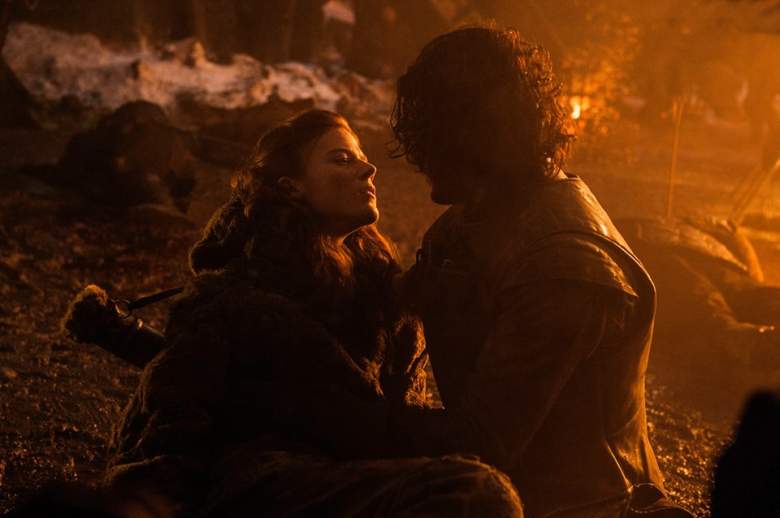 Leslie joined Game of Thrones in season two as Ygritte, but became a major player in season three and four. She sexually teases Harington’s Jon Snow until they consummate their relationship in season three. She’s forced to kill him on multiple occasions, but can never bring herself to do it before she ends up dying in his arms at the end of season four.

Jon Snow also appeared to die in the season five finale, but Harington has kept his long, curly hair and beard, leaving some fans to speculate that his character isn’t really dead. Of course, fans now know that Snow didn’t die.

The final season of Game of Thrones is expected to air in late 2018.

Leslie snapped a photo of her and Kit at the ‘Game of Thrones’ premiere in 2013.(Instagram/roseleslie)

The couple was first spotted out in August 2012 at the Rossopomodoro restaurant in London, according to TMZ. Photos showed the two leaning into each other at the table and Harington caressing Leslie’s hand.

Harington and Leslie split a year later, according to E! News. The datng rumors started again in 2014 when the two were spotted looking quite friendly as they exited the terminal at LAX on their way to San Diego Comic-Con.

Leslie and Harington got comfy waiting for their flight last August in London. (Instagram/@thekirbyn)

4. They Rekindled Their Romance Earlier This Year 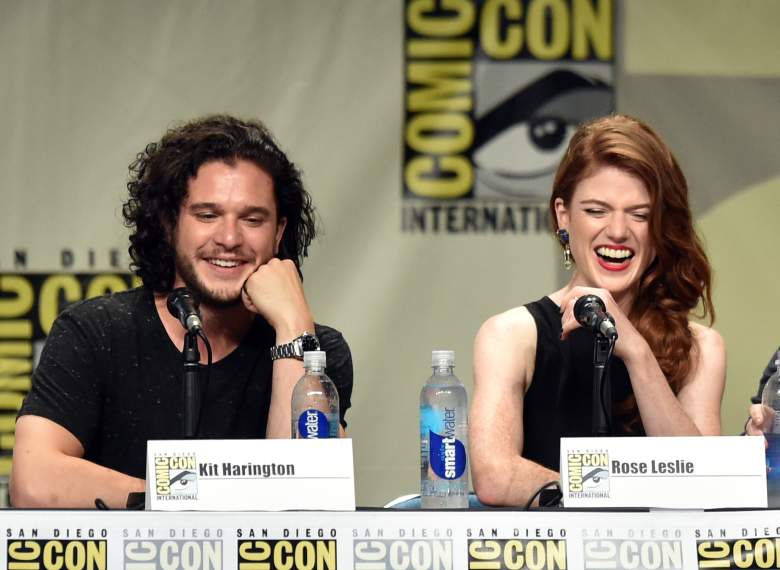 Before rekindling their romance this year, the two have spent a lot of time together working and promoting past seasons of ‘Game of Thrones.’ (Getty)

Earlier this year, Harington and Leslie were spotted holding hands and kissing while on a shopping trip at The Grove shopping center in Los Angeles. They also were seen at LAX together with their GoT co-star, Sophie Turner.

Their other co-star, Emilia Clarke, all but confirmed their relationship speaking with Entertainment Tonight at the Screen Actors Guild Awards.

5. Harington Is From England and Leslie Is From Scotland 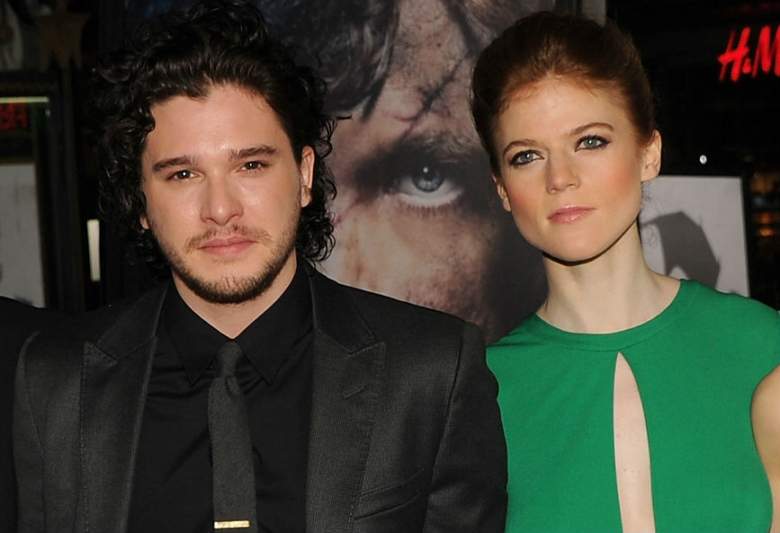 Kit Harington and Rose Leslie were both born and raised in the United Kingdom.

Harington was born in London as Christopher Catesby Harington, but his mother shortened his first name to Kit like Christopher Marlowe, the English playwright. He first acted on stage in the National Theatre’s adaptation of War Horse and landed his debut television gig as Jon Snow on Game of Thrones.

Leslie was born to parents of Scottish nobility and raised in Lickleyhead Castle near Aberdeen, Scotland. She attended the London Academy of Music and Dramatic Art and landed her first television credit in the TV movie, New Town, in 2009. In addition to her time on Game of Thrones, she also starred in the wildly popular series, Downton Abbey. 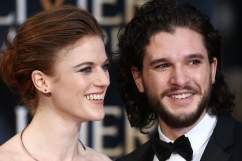