In the beginning of the episode, Garcia announces that she will be going to London to visit former team member Emily Prentiss. As for Hotch, he is arrested in front of his son Jack, JJ and her son. Hotch is convinced that the arrest is a mistake and the BAU scrambles to figure out what to do to help their boss and friend.

Hotch is confronted with a recording of his voice that he says is not him and the recording states, “Today will change everything.” Hotch says there must be a bigger plan going on and this recording is to distract his team. He is then confronted with more information that implicates him in a conspiracy of some kind. In the meantime, the BAU continues to try to figure out how to prove Hotch’s innocence. The team realizes who may be behind the plot against Hotch and the BAU – Antonia Slade had warned Hotch there was a storm coming. Antonia’s son Asher Douglas is behind “the storm.”

Hotch is told that Mr. Scratch was the person who “tipped off” the feds. Mr. Scratch gives a disturbing testimony about “the kind of man” he believes Hotch really is … Hotch’s credibility is questioned, especially when it’s revealed that Hotch didn’t report Mr. Scratch had exposed him to hallucinogenic drugs.

The BAU finds Douglas, who reveals that he knows who each one of them are, that he’d been watching them for a while. Reid puts handcuffs on Douglas and realizes that Douglas is autistic. The team begins to figure out that someone else is pulling the strings when it comes to Douglas. Douglas realizes that his “friend” behind the storm lied to him when asking a “hypothetical” situation involving nitromethane.

Back at the office, the BAU tries to figure out what cryptic emails mean when it comes to the conspiracy surrounding Hotch. They discover that a prison break is “the storm”. A man named Eric Rodden is set to be broken out of prison. 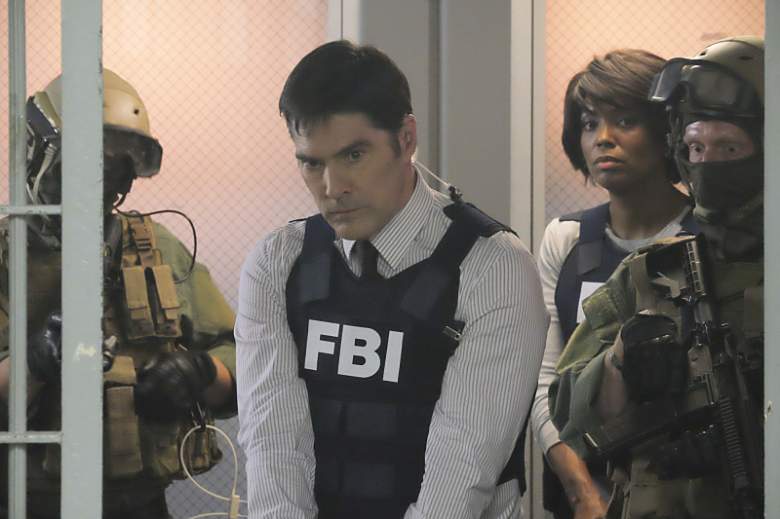 Hotch is still being held up as the BAU heads to the prison. SWAT and the BAU head into the prison and try to figure out the method of escape that some of the prisoners are using. They find a tunnel inside the walls and when prisoners dig their way through, the BAU are waiting for them. Inside the prison, however, chaos ensues. Dr. Tara Lewis ends up in the serial killers’ unit when the doors get unlocked and she is surrounded. Tara begins to shoot her way out and is soon aided by SWAT, who have Hotch in tow.

While at the prison, Hotch figures out where the bombing is set to take place – The Ivory Tower. The anarchists, in the meantime, are arming the bomb. The BAU is able to stop the anarchists.

The Ivory Tower is a loose reference to the Song of Solomon, a book in the Old Testament & not a real-life safe house #CriminalMinds

Back at the office, JJ and Hotch tend to their sons who have been waiting in Hotch’s office. Hotch’s son Jack is a bit cold and short with his dad.

Rossi’s relationship with his baby mama Hayden becomes compromised when she feels he is more dedicated to the job than her. Fortunately, she decides to stay and tell their daughter Joy that they are together.

The episode ends with the team gathered around the dinner table laughing and toasting to one another when they each get an emergency call that there have been three more prison breaks. Thirteen serial killers have escaped, including Mr. Scratch.

Stream Criminal Minds live via via CBS All Access, a service that streams live CBS shows in most U.S. markets.