Funny guy Fred Armisen, best known for his 11-year stint on SNL, is a versatile man when it comes to all things entertainment. The Emmy-nominated comedian is the creator and co-star of the hit sketch comedy series, Portlandia, and has appeared in classic films like Europtrip, Anchorman, and Cop Out. Though the 49-year-old stand-up is not currently married, he’s been dating actress Natasha Lyonne (famous for her roles in American Pie and Orange is the New Black) since 2014. Armisen also has two ex-wives: Sally Timms (their marriage lasted from 1998 to 2002) and Mad Men actress Elisabeth Moss (they were married in October 2009 and filed for divorce in 2010.)

In 2014, Moss was featured in New York Magazine, where she described her marriage to Armisen as being “traumatic”. She claims she was too young to get married at the time, and is thankful she was able to remove herself from such a terrible marriage. “It was extremely traumatic and awful and horrible. At the same time, it turned out for the best.”

Armisen has acknowledged that he was a “crappy” husband to Moss on the Howard Stern Show. According to US Weekly, he also told Stern that he feels bad for every girl he’s ever dated. “I think I was a terrible husband, I think I’m a terrible boyfriend. I want it all — fast. I want to be married . . . the amount of girls I’ve lived with right away . . . and then somewhere around a year, two years, I get freaked out.”

Luckily, his relationship with Lyonne seems to be going strong. The two walked the red carpet together at the 2015 Emmys, and were seen posing and smiling at the premiere of Zoolander 2 in April. 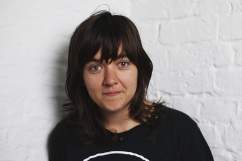