Did Taylor Swift lie? Did she give Kanye West the “okay” to write his lyrics about her in his song “Famous”? When “Famous” came out, Twitter blew up over West’s controversial lyrics about Swift, but not much was uttered from each camp until Grammys night. When Swift accepted the award for Album of the Year, she addressed the song without actually naming it, saying that there will be people who try to “cut down your success” and claim they’re responsible for your fame. Watch her acceptance speech above.

Unfortunately for Swift, Kanye West had their phone conversation on tape and Kim Kardashian posted it tonight to prove that Swift was lying about not giving her approval on the song. Check it out in the below tweet.

Here is the entire conversation Taylor & Kanye had, judge for yourself. pic.twitter.com/InTjvPGKe3

So what are the lyrics that Swift got in a tizzy about?

When the internet first blew up about the lyrics, West tweeted out messages that Swift had a long phone conversation about the song, thought it was funny and even gave him her blessing on it. A rep for Swift then released the following statement about the situation:

Kanye did not call for approval, but to ask Taylor to release his single ‘Famous’ on her Twitter account. She declined and cautioned him about releasing a song with such a strong misogynistic message. Taylor was never made aware of the actual lyric, ‘I made that bitch famous.’

Then, after Swift’s veiled jab at West in her Grammys speech, West took the high road in response, but his true feelings were caught in a candid recording of him backstage during an SNL appearance. In the snippet, West called Taylor Swift “fake ass.”

Now, Kim Kardashian is trying to set the record straight on her end, saying that Swift and Kanye West were on the same page about the “Famous” lyrics until she hit the Grammys. Khloe Kardashian has also spoken out, explaining:

I don’t really feel like saying much because the Taylor Swift fans love her and I’m all for that and all I know is I saw the video, I’ve heard Taylor and I think that Kanye did the right thing. So please Taylor Swift fans don’t kill me. 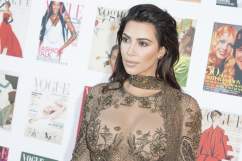 On tonight’s episode of Keeping Up With the Kardashians, Kim tells her sister:

I never talk shit about anyone publicly, especially in interviews. But I was just like I had so had it. I just felt like I wanted to defend him in it because it’s like, she legitimately quote says, ‘As soon as I get on that Grammy red carpet I’m gonna tell all the press. Like I was in on it.’

Theres a BIG difference between shading someone and speaking the truth!

Check out the music video for “Famous” below, which features a lot of nudity. You may need to sign in to a YouTube account to prove you are of age to watch it.