Fans watch the Killjoys premiere, or who got an early glimpse of the trailer, may have noticed something different: the opening credits have changed…completely. Unfortunately, many fans aren’t very happy with the change.

As a refresher, here’s what the opening credits used to look like for Season 1.

So far, fan reactions are mixed. On YouTube, fans noted that they didn’t really like the opening credits for Season 1 and think these are a big improvement. (If you ever watched iZombie, the new credits have an animation feel very similar to that show’s opening credits.) On Reddit, fans were less impressed and noted that they missed the way the old credits looked and the song.  What do you think about the change? 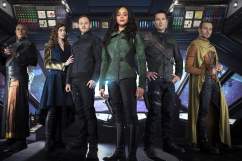 ‘Killjoys’ Premiere: What Time & Channel Does It Air Tonight?