We're highly suspicious that Mr. Robot may be starting a new ARG for Season 2. In between Season 1 and Season 2, the show ran an ARG with an amazing prize. Now that clues and Easter eggs are already being dropped in the Season 2 premiere, we're gathering all possible clues in case another ARG is starting.

In one of the trailers for Season 2, a number was displayed. If you called that number, you heard a message that included a series of noises. Once decoded, the noises led you to a website. The website had another code that, once solved, brought you to a prize. Fans began receiving their prize this week, which was a black hoodie with "fsociety" on it, valued at $89. Each fan also received a number indicating where they landed in the prize grab.

After several clues were dropped during the Season 2 premiere, many fans are wondering if a new ARG is in the works. We're going to go step-by-step through all possible clues to see what happens. Click through the gallery to see each possible clue, along with Easter eggs in the show. This contains spoilers for where the clues lead and spoilers for the premiere of season 2. Do you think this is a new ARG? (USA Network) 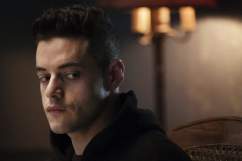 ‘Mr. Robot’ QR Code: Where Does It Lead?