Alan Thicke at The Carousel of Hope Ball, in Beverly Hills, California, on October 8, 2016. (Getty)

Growing Pains actor Alan Thicke has died at the age of 69 in California, TMZ reports.

His son, Robin Thicke, told the Los Angeles Times his father was “the greatest man I ever met” and was an inspiration.

“The good thing was that he was beloved and he had closure,” Robin Thicke told The Times. “I saw him a few days ago and told him how much I loved and respected him.”

Here’s what you need to know about Thicke’s death and life:

1. He Suffered a Heart Attack While Playing Hockey With His Son

He was pronounced dead at the hospital about noon Tuesday, according to TMZ. Citing law enforcement sources, TMZ reports that an organ recovery has been contacted so that his organs can be donated.

According to TMZ, Thicke regularly played hockey at the Pickwick Ice rink in Burbank, and was on the ice with his son about 11 a.m. when he began to have chest pain. Thicke then became nauseous and vomited, and was taken to the hospital about 11:30 a.m.

Thicke’s older son, Robin, told the Los Angeles Times one of Thicke’s last comments was telling Carter “nice shot.” He posted a photo in 2015 on the ice with Carter:

The 69-year-old Thicke was recently cast in the second season of Fuller House, and tweeted about the show earlier Tuesday.

Season 2 Fuller House looking good. I even like the ones I’m not in! #fullerhouse @fullhouseguy @bobsaget @candacecbure #netflix

Full House star Bob Saget was among the first celebrities to react to Thicke’s death, tweeting, “So sad is the passing of Alan Thicke. Such a good husband, father, brother, and friend. He will be deeply missed. Rest in peace dear Alan.” 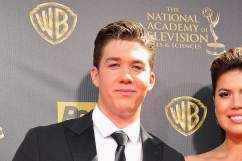 He is survived by his three sons, two with his first wife, Brennan, 41, Robin, 39, and one with his second wife, Carter, 19. He is also survived by two grandsons, Tyler, Brennan’s son, and Julian Fuego, Robin’s son.

Thicke’s oldest sons followed in his footsteps into the entertainment industry. Brennan Thicke was a voice actor in the 1980s, playing the voice of Dennis Mitchell on Dennis the Menace and Scott Trakker on the MASK TV series.

Robin Thicke is an award-winning singer and songwriter best known for his pop hit “Blurred Lines.”

Thicke and his family have been featured on a Pop reality show, Unusually Thicke. He talked about his sons in an interview with TVGuide in 2014, at a time when Robin’s song was a worldwide hit.

“I get all kinds of Robin love and I love that,” he said. “Somebody asked me in an interview not too long ago, ‘Are you jealous of Robin’s musical success?’ I said, ‘You don’t have kids, do you?’ Because any parent would understand. It’s a great thrill.”

“It’s completely legal,” he told TVGuide. “The challenge is the great hypocrisy of how do you support one kid’s business while at the same time telling the other one not to smoke weed? We do a whole episode about that.” 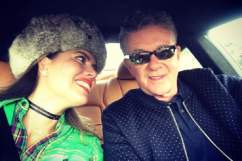 3. He Grew Up in Canada & Attended Western Ontario University

Thicke was born March 1, 1947, in Kirkland Lake, Ontario, Canada. Thicke was the homecoming king at his high school, Elliott Lake Secondary School, and graduated at the age of 16 after skipping two grades.

He then went on to attend Western Ontario University.

“My time at Western, in retrospect, was a great time, and instrumental in everything I have managed to do in my life,” Thicke, a member of the Delta Upsilon fraternity, told the school’s alumni magazine in 2011. “But by today’s standards, I would consider it to be simple, protected, naive, simple old Canadian values.”

Thicke was inducted into Canada’s Walk of Fame in 2013.

“I think I have an exemplary work ethic – one which has given me a pleasantly varied career, and one propelled by a healthy insecurity,” he told the Globe and Mail while reflecting on his induction. “It makes you proactive, in terms of projects and writing. You don’t sit around and wait for the phone to ring. I’ve also always been very faithful and supportive of Canadian talent, and I assume that that’s part of this recognition. 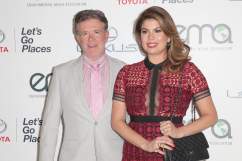 4. He Began His Career as a Game Show Host in Canada

Thicke began his career in the entertainment business as a game show host in Canada. He also spent time as a talk show host.

In an interview with Smashing Interviews Magazine, he talked about why he got into entertainment:

Well, my family was from a small gold-mining community in the far north of Ontario, Canada. My dad made a point of making sure that I worked in the gold and uranium mines every summer so that I understood how important it was to get an education and maybe one day have a chance to leave that small town. He was very good in guiding us in that direction and instilled some ambition in us that made us want to go somewhere else. At high school, I performed in all the variety shows and drama clubs and that sort of thing, emceed programs in town.

Before I left town, I had a little rock and roll band, and we played at parties, so I was doing a number of things I was interested in that I thought might be a path out of town sooner or later, and it was. I worked at the CBC in Canada for a few years and then came down to try my luck in the States.

Thicke and his then-wife, Gloria Loring, composed several well-known TV show theme songs in the 1970s, including the themes for Diff’rent Strokes and The Facts of Life .

“Well, I did write a lot of TV themes – I wrote about 45 of them, and a couple of which are still reference and popular today, like ‘Diff’rent Strokes’ and ‘Facts of Life.’ But I was a limited musician. I only had six chords and I kept moving them around in different combinations till they caught me,” he told The Morning Call in 2015. “But I had a lot of fun with music, and ironically I play very simple guitar. So most of what I ever wrote sounded a little bit like – little country, little pop, little rock and then I had other people reinterpret or cover my songs and put it in a whole different genre. I mean, I wrote for Glen Campbell, Anne Murray, Mac Davis, The Statler Brothers, Kenny Rogers, Olivia Newton-John. And then, by writing in that genre, ironically, some of my stuff got covered by The Spinners, Lou Rawls and Al Jarreau.” 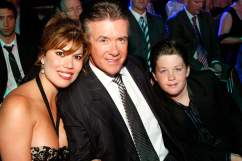 5. He Is Best Known for Playing the Dad on the TV Show ‘Growing Pains’

Thicke is best known for playing the dad, Jason Seaver, on the TV show Growing Pains from 1985 until 1992.

“It sort of saved my life,” Thicke told the Western Ontario University alumni magazine in 2011. “I was on a dramatically, universally hated talk show when I first went public in The States. I was so happy to recover from that career suicide with a sitcom. I will always be happy for that.”

In an interview with Smashing Interviews Magazine in June, he talked about how he was type-casted after the Seaver role, and how he will be remembered:

There’s a certain amount of typecasting, but I enjoyed the role. I enjoyed what the character stood for and what the show aspired to do, which was to entertain and also be somewhat of an example as to what we all would hope our family dynamic could be. I was proud of that.

If I had one thing I had to leave on my tombstone, and it had to be “Jason Seaver,” I’ll take that. It was a role not too far away from my own life experiences and my own values. It has been good to me in all these subsequent years.

It’s true that I play a lot of dad and now grandpa parts, but I also get enough of the other stuff that I get to spread my wings a little bit. But “Jason Seaver” certainly was my stock and trade and the image that has stayed with me. I’m comfortable with that. Better than a slasher, serial killer.

He also appeared in several other movies and TV shows during his lengthy acting career, including a recent guest appearance as himself on the NBC show This Is Us. He also guest starred as himself on the CBS comedy How I Met Your Mother. 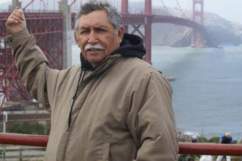