Britney Spears’ sister Jamie Lynn is going through a horrific trauma, with her daughter Maddie reportedly in critical condition, following an ATV accident. Spears had daughter Maddie when she was a teenager, but the relationship with Maddie’s father did not work out. Currently, Spears is married to husband Jamie Watson, who was present at the time of the ATV accident, according to TMZ. Get to know more about Watson, his bond with Spears’ daughter and the dynamics of his relationship with Spears.

1. Spears Was Not Attracted to Watson When They Met

Jamie Lynn Spears and her husband married in 2014 and they currently reside in Kentwood, Louisiana. Watson is a businessman, who owns a company called Advanced Media Partners, and when he met Spears, he said he was unaware of her Hollywood fame. In her TLC documentary Jamie Lynn Spears: When the Lights Go Out, Spears revealed that she wasn’t immediately attracted to her husband. She revealed:

I think we grew on each other, which is probably why we are still together … He was kind of awkward and kind of weird … He was always uncomfortable … looking back though, I think it’s kind of sweet, because he was acting that way because obviously he liked me.

In the TLC special, Watson said that he’s a “lucky guy.”

2. It Was His Bond With Spears’ Daughter That Made Watson See a True Future With Spears

In Spears’ documentary Jamie Lynn Spears: When the Lights Go Out, Spears said that she and Watson dated for about five years before they got married, though she admitted they broke up a couple times. Watson explained that what really made him want to be with Spears for the long haul was her daughter. He explained:

I knew I wanted to marry her when basically I had fallen in love with Maddie just as much as her. And I couldn’t not be a part of her or Maddie’s life. 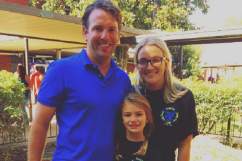 Spears found out she was pregnant at age 16 with her then-boyfriend Casey Aldridge. The two became engaged, but ended up breaking up when Maddie was still very young. Spears told Entertainment Tonight:

We wanted to know and stand by what our tradition is and do what we thought was best for our child, but it turns out us being apart is best for her. It’s a pretty cliche answer. Two young kids who tried to do the right thing, but it just wasn’t the right thing for us.

According to People, Aldridge and Spears broke up in 2010, which is the same year that Spears started dating husband Watson.

4. The Song “How Could I Want More” Is About Watson

Entertainment Tonight reported that Jamie Lynn Spears found inspiration for the song, “How Could I Want More,” in Watson. Watson was managing and building computer and security networks, when the couple met through mutual friends.

5. Watson Is a Strict Parental Figure

In an interview with Entertainment Tonight, Jamie Lynn Spears talked about how the dynamics have changed with her daughter as she starts growing up a bit. Spears also said that her husband is definitely more strict than she is, explaining:

We are very strict on what she eats and different things like that, but my husband is very strict on most everything. I would say I am cool at times, but [Maddie] is getting to that age now where if I want to dance around with her and friends, that is not that cool anymore. She is kind of like, ‘Mom! Don’t do that,’ which is really weird for me because I used to love that!

Read More
Britney Spears, Celebrities
Who is Jamie Lynn Spears married to? Get to know Spears' husband Jamie Watson, his relationship with her daughter and their life together.