Rag’n’ Bone Man is a singer, songwriter and guitar player. He’s been in the music industry for almost a decade now, honing his unique blend of blues and hip-hop, but it has only been recently that he’s gained a reputation as one of the UK’s most promising stars.

Most of this praise is due to his debut album, Human, which was released on February 10th to widespread critical acclaim and surprisingly strong sales. Since then, Rag’n’Bone Man (born Rory Graham) has earned a gold single, appeared on The Tonight Show With Jimmy Fallon, and reinvented the blues for a whole new generation of listeners.

We celebrate this success with five fast facts you need to know about Rag’n’Bone Man.

1. He Was In the Rap Outfit Rum Committee

The singer actually spent the first few years of his career as a rapper in Brighton’s underground hip-hop scene. As part of the collective Rum Committee, Rag’n’Bone Man and his peers gained experience by opening for stateside rap stars like Pharaoh Monche and KRS-One. “We’d just be in a room together, in a circle,” Rag’n’Bone told Huck Magazine, “working off whatever each of us had throwed down. There was loads going on… and [I] naturally found myself drawing towards that kind of side of things.”

Rag’n’Bone also saw rapping as the next best option to singing, for which he felt he wasn’t good enough. It was only through the encouragement of his father that he decided to play a blues show at a local pub. “It just took that one time, you know, to get a bit of respect from the older guys playing,” he said, “they were like, you’re voice is great, so it made me want to do it even more. Rag’n’Bone Man released his first vocal EP, Bluestown, in 2012.

2. His Name Is Inspired By a British Sitcom

The moniker “Rag’n’Bone Man” was actually inspired by Graham’s experiences as a youth. “I used to go round to my granddad’s and we used to watch Steptoe and Son together,” he revealed to Huck Magazine. In the UK, a rag-and-bone man (like the show’s title character) is the equivalent of a junk dealer, collecting unwanted household items and sells them to merchants. This dutiful, unglamorous position appealed to the working class Graham.

“I always liked it as a name,” he shared, “I loved it in fact, and before was Rag’n’Bone Man it was Rag’n’Bone MC — back when I was spitting over jungle.” The singer went on to explain how the name is also an emotional reminder of a simpler, more carefree time: “It comes from being a kid, being with my granddad and sitting back and reminiscing. People think it’s a silly name, but hey.”

Rag’n’Bone made headlines when he won the Brits Critics’ Choice Award in December. The prize has gained a reputation for being a near-guarantee of success for future artists, as previous winners have included Adele (2008), Florence + The Machine (2009), Sam Smith (2015), and James Bay (2016). The singer was reportedly stunned by the announcement, saying “I thought they had made a mistake. I was up against two pop giants [Anne-Marie and Dua Lipa]. It’s bloody brilliant! I’m crazy happy. Proper massive grin.”

4. He Is Signed to Columbia Records

After the release of Bluestown, Rag’n’Bone Man followed it up with the EPs Wolves (2014) and Disfigured (2015). These projects helped the singer shape his sound, from the acoustic, Muddy Waters-meets-Al Green sound to something more experimental in nature, with hints of electronic and hip-hop music. Key songs from this period include “Life In Her Yet,” “Lay My Body Down,” and “Perfume,” which you can watch above.

He linked up with Warner Chappell in 2013, which allowed him to give up his day job as a carer for people with Asperger’s Syndrome to focus on his music career. With this break came increased exposure, including guest spots on BBC Radio 1 and collaborations with artists like Vince Staples, Stig Of The Dump, and producer Mark Crew. Impressed by the singer, Columbia Records signed him to a major label deal in 2016, where he would release his debut album Human and its title single.

1. He Has The Biggest-Selling Male Debut of the Decade

With Human, Rag’n’Bone Man scored the fastest-selling male debut of the decade. According to the Official Charts Company, the album debuted at number one on the UK Album Charts and moved 117,000 units its first week, outselling the remainder of the top 20 combined. This puts the singer miles ahead of superstars like Ed Sheeran and Sam Smith, whose debut albums pulled in 102,000 and 101,000 their first week, respectively. The album also hit number one in Ireland, Belgium, Scotland, and the Netherlands.

These tremendous numbers were also helped by the lead single, which rose to number two on the UK Single Chart. While Ed Sheeran’s “Shape of You” kept it from the top spot, “Human” still managed to be the most downloaded and top-selling single during Christmas week in the UK. “Human” also cracked the top 10 Alternative Songs Chart in the US, suggesting that Rag’n’Bone Man’s crossover success will be coming sooner than later.

Check out his performance on The Tonight Show With Jimmy Fallon below. 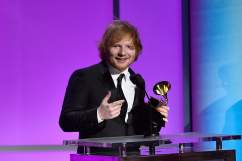