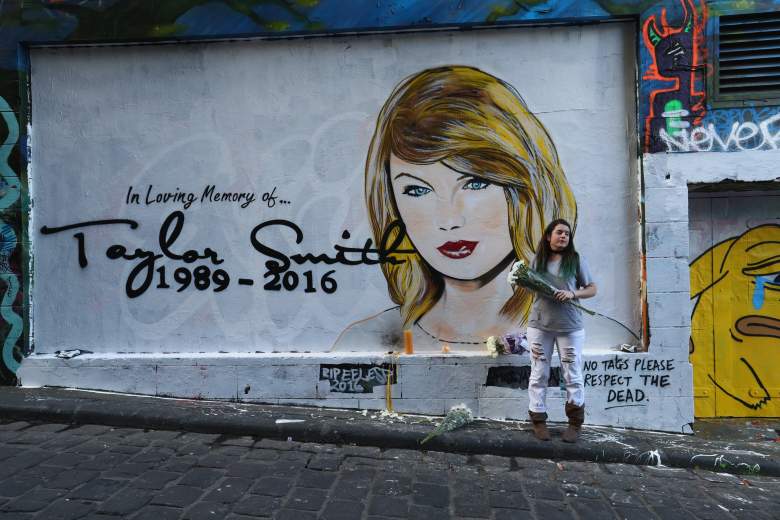 The above mural is a satirical piece by Melbourne graffiti artist Lush Sux in response to Taylor Swift‘s “Famous” feud with Kanye West and Kim Kardashian in the summer of 2016. You can read more on that here. It’s a fitting painting though, especially consider all of the death hoaxes and conspiracy theories surrounding the “I Don’t Want to Live Forever” singer. No, Swift isn’t dead or a clone, but many rumors throughout the years might have tricked you into believing so.

One of the first death hoaxes concerning Swift came back in 2012. It all started on Twitter when a fake account for TMZ, with the handle “@TMZ_Nevvs,” posted the message: “R.I.P. Taylor Swift. The popstar had a car accident some hours ago.”

Two more parody accounts for pop stars Demi Lovato and Katy Perry got involved as well. Both accounts posted the same message on Twitter: “R.I.P. Taylor Swift. Seems like part of me has gone with her. I’ll always love you my fiend! :'( .”

The fake posts on Twitter spread to fans and the hoax had started. Fortunately, it turned out to be false and Swift didn’t die in a car accident.

Perhaps even more bizarre than the celebrity death hoaxes about Swift are the conspiracy theories attached to her name. The most popular rumor is that she’s a clone of notable Satanist, Zeena LaVey Schreck.

Schreck is the daughter of the Church of Satan founder, the late Anton LaVey. She’s a former member of the Temple Of Set, and the founder of Sethian Liberation Movement. In the 1980s, she became a spokesperson for her father’s church, and took on the Satanic Panic delusion that swept the world into fear.

Here is one of her appearances:

This theory claims the clone (Swift) was created to get more people into the Church of Satan. Swift was born in 1989, and Schreck left the church in 1990. This isn’t just a coincidence to believers, but for now, all it is is a conspiracy. Do you believe this clone theory?

Taylor Swift is Zeena Lavey's clone; Zeena was a priestess of the church of Satan

I fully support the theory that #taylorswift is a clone of a former satanic priestess Zeena LeVey.

can we talk about how taylor swift really fckn look like zeena lavey….?

like…does Beyoncé have clones of herself that work for her??? is Taylor Swift a clone of Zeena LaVey??? @illuminati explain