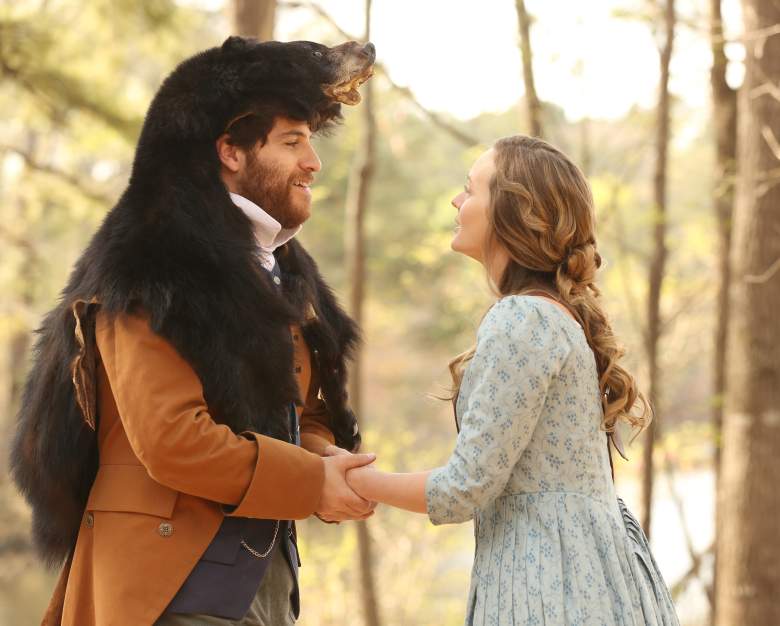 Leighton Meester and Adam Pally in Making History. Yes, that is a bear carcass. (Qantrell Colbert/FOX)

Adam Pally is back on Fox after the network dropped The Mindy Project as the star of the new time-traveling comedy Making History. In the series, he plays Dan, a facilities manager at a Massachusetts college and learns the secrets of time travel. He’s been heading back to the 1700s regularly to meet his girlfriend, Deborah Revere (Leighton Meester), the daughter of Paul Revere.

At first, he thinks this is innocent, but he soon learns that his decisions are screwing up with the present. One day, his actions force Paul Revere to delay his famous Midnight Ride. In order to fix things, he brings along his friend, history professor Chris (Yassir Lester) to the past to help make sure the American Revolution happens on schedule.

The series kicked off on Sunday, March 5 at 8:30 p.m. ET and future episodes will air in the same timeslot. Here’s a look at the action in the “Pilot.”

To Infinity… and Beyond! 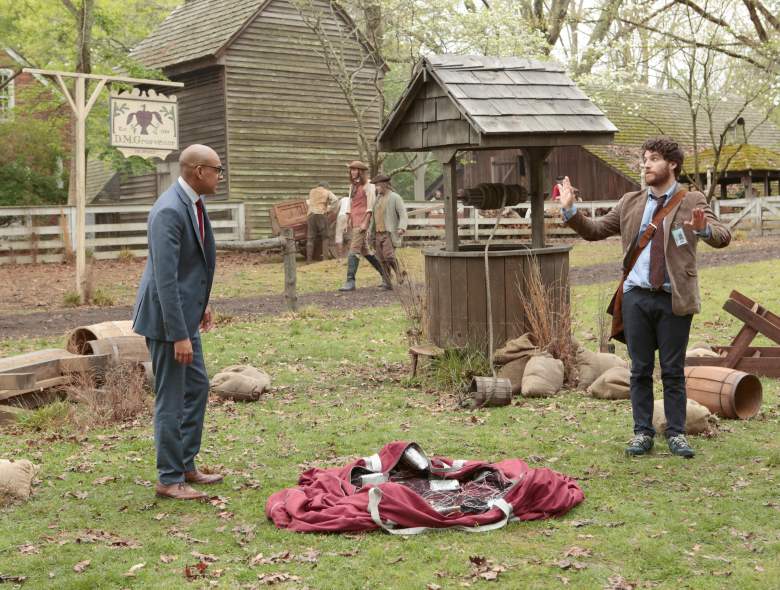 The episode – and series – kicks off with Dan rushing to pack his stuff so he can get out of his office at 5 p.m. on the dot. But then Chris storms in, complains that his classroom is brutally hot and requests that he fix the temperature. Dan reminds him of the time, but Chris says that it’s really 3:00. He threatens to get Dan fired. “Go ahead pal. A lot of people have tried,” Dan says. Dan rushes out of the office and drives out to Lexington.

Just as he reaches the Lexington border, he runs into a ditch. After the sound of lightning, he emerges in full colonial gear, and there’s a horse neighing. He’s arrived in 1775 Lexington!

That night, he meets Deborah, who is very impressed by his Bartman Dance. While teaching her the moves, two British soldiers appear. “Let’s talk bro to bro,” Dan says. But one soldier isn’t interested in his 21st century lingo and puts a bayonet to Dan’s throat. With Dan’s life on the line, Deborah pulls out a giant ham, which oddly impresses the soldier. “It’s beautiful,” he says and the two soldiers leave.

“Where is it that you always go?” she asks.

“To infinity… to infinity and beyond!” 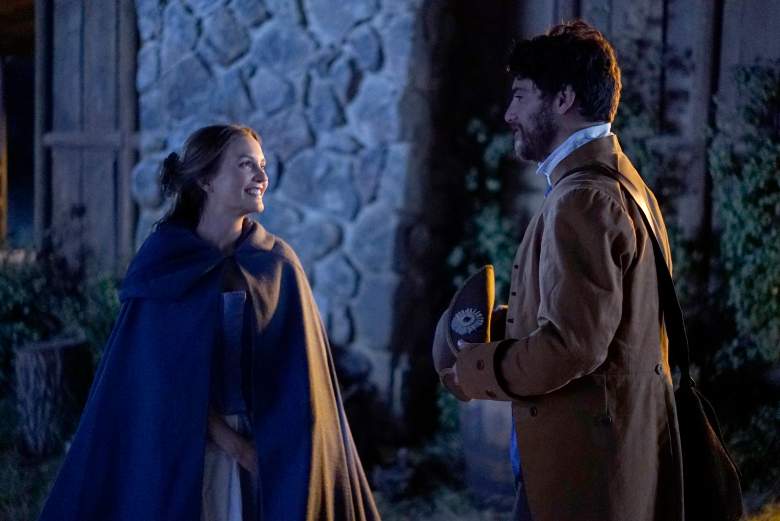 After the title, Dan frantically runs through the college. “What are you eating?” he asks a student. “Fish and chips.” OK, now something is really up.

Dan bursts into Chris’ class. Thankfully, the time stream hasn’t changed that much yet, because Chris is still telling his students that John Hancock signed the Declaration of Independence. (As anyone who has watched Back to the Future knows, changes to the time stream are not instant.) After class is dismissed, Dan tells Chris that he has urgent questions about colonial Massachusetts. Chris finds this hard to believe. Why would someone have urgent questions about things that happened 250 years ago? Well, considering that Starbucks is now selling tea instead of coffee, Dan’s questions are urgent.

Dan takes Chris to his home, which is filled with colonial artifacts. Dan then shows off his time machine – which turns out to be a giant duffel bag. Chris doesn’t believe that. After all, what story starts with a guy getting in a duffel bag in a garage has a happy ending, Dan? “Our story!” Dan insists. “The one that begins right now.”

Dan explains that he thinks something happened that screwed up the American Revolution. The signs are right there – a kid is eating fish and chips and Starbucks has advertisements for tea. Chris is still skeptical, but Dan begins to convince him with his artifacts. Dan starts breaking all his stuff and tells Chris that he can get replacements. This convinces Chris to at least try.

They get in the duffel bag, where Dan always keeps an extra ham. (“In the 1700s, it’s like diamond-covered heroin.”) Next, they arrive in 1775, as Dan promised. Chris couldn’t believe it and he starts throwing up immediately. “Oh, I forgot to tell you. The past smells terrible because there’s doody everywhere.”

You Made a Time Machine… Out of a Duffel Bag? 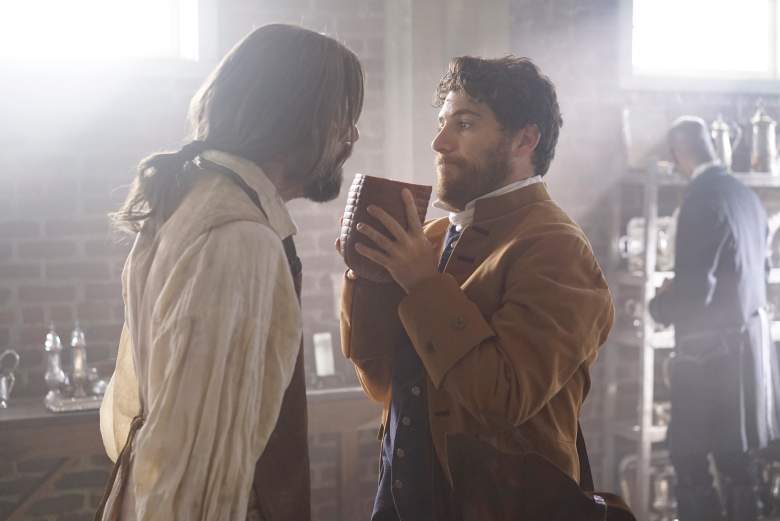 They later emerge from a stable in full colonial gear and Chris is still in disbelief. “You invented time travel,” he tells Dan. “Yeah, well… sort of,” Dan shrugs. They arrived on April 21, 1775, two days after the American Revolution was supposed to start in Lexington. But there are still British troops around, proving that the revolution hasn’t started yet.

They then head to Buckman Tavern, where some of the Founding Fathers met to discuss plans. On the way, Dan meets his girlfriend, Deborah and Chris has to hide behind a tree. She made him a hat out of a bear carcass. He didn’t get her anything, so he starts singing “My Heart Will Go On” to her.

Chris then makes a sound, so Deborah instantly tosses an ax at his head. Chris gets out of the way just in time, and Dan introduces Chris as “Queequeg.” Dan makes up a story about how he’s helping Queequeg go north and he only knows the word “Hello.” Deborah thinks he might know Dutch, but Dan says he got run over by loose mules, so he doesn’t remember any other words. After Deborah leaves, Chris can’t believe what Dan is doing. Dan still doesn’t see how important this relationship is.

At Buckman Tavern, Chris is stunned that he’s in the presence of some Founding Fathers. He wants to give a rousing speech to inspire a revolt, but Dan doesn’t think that’s going to work. The moment Chris starts talking, the bartender starts yelling “Slave! Who brought a slave in here?” “Wow, good to see Boston hasn’t changed,” Chris says. “Ezekiel, we’ve talked about this!” Dan says to the bartender. “Sorry,” he replies.

Chris goes on about how “taxation without representation” is bad. He starts talking about how bad King George III is, but everyone pulls out their pistols to defend the King. Chris is really puzzled. “Try something from a movie,” Dan whispers.

First, Chris quotes from Friday, but that doesn’t work. “A white movie!” Dan says. So, Chris starts yelling “Show me the money!” over and over again. That alleviates the tension and Chris sits down. Dan suggests that they go sit down with his friends John and Sam. “Are you talking about John Hancock and Sam Adams?” Chris asks.

At the table with John and Sam, the two are still impressed with “Show me the money.” After that, they reveal that Paul Revere has been missing for a month, leaving the revolution without a ringleader to get everyone excited about fighting the British. John then offers Chris some of Sam’s new beer in a giant bowl. Chris likes it, but then John reveals that it was actually the chamber pot.

The next morning, Chris tells Dan that the key is getting Paul Revere back on track. He provides some backstory on Revere’s life, but Dan ignores it. They go right into Revere’s blacksmith shop. They take a selfie with Revere in the background before talking with him. They tell him that they were thinking about waging war against the British.

There are more important things going on in Revere’s life though. It turns out that Deborah was supposed to marry another blacksmith, but he has found out she’s running off with another man. Dan tries a ham to calm down the situation, but it doesn’t work. “The British can wait, until I find and kill Deborah’s suitor with this weapon I’ve been forging,” Revere says. Dan backs away and tells Revere if he ever changes his mind to contact them. Dan’s name is now Tom Cruise and Chris is Magic Johnson and they’re the Blues Brothers. As they slam the door and leave, Revere whispers, “They’re not brothers.”

At an inn, Chris tells Dan that he has to break up with Deborah. Dan doesn’t want to, because he’s in love with her. She’s a really special girl, Dan says, and he uses future-speak to impress her when he can’t find the words. “In 1775, I have an amazing girlfriend. In 2016, I am a colossal screw-up,” Dan says. Chris tries to convince him that he’s not. After all, he just invented time travel. “You’re like, the smartest dude in the world!”

But then Dan comes clean. He didn’t exactly invent time travel. He “discovered” it among his father’s possessions after he died.

Chris tells Dan that he brought him back in time to help and the only way Dan can fix everything is by breaking up with Deborah. He accuses Dan of being selfish, but Dan yells at Chris for not thanking him for bringing him back in time. “Thank you for what? All that’s happened is I puked, I had an ax thrown at my head, I was treated like a slave, and I drank John Hancock’s urine!”

“Well, I don’t think it was just John Hancock’s, FYI. I think everyone had a squeeze.”

You Had Me at Hello

In the morning, Chris is patting his horse. “You get treated better than me in this time,” he tells it.

At the river bank, Dan tries to break up with Deborah. First he dismisses her offer of sharing a $5 house with her, then says he’s not ready for the commitment. “What commitment? There’s a flu going around. We’ll be lucky to make it through the winter,” she tells him.

Dan tries to convince her to marry the man Revere wants her to be with. When asked why he is doing this, Dan says she wouldn’t believe him if he told her. He then explains that he’s from the future and that them being together has changed things in history. It’s breaking his heart, but they have to break up. Deborah starts crying, and surprisingly believes her. (Wow, that went better for Dan than it did for Doc in Back to the Future Part III.)

Deborah says that everything makes sense for her now, from Dan’s odd language to his wondrous songs. She can’t imagine her life without him now. After all, he always knows what to say, like “You complete me” and “You had me at hello.”

Meanwhile, Chris is captured by two British soldiers, so Deborah and Dan rush off on horseback to help Chris. Deborah cuts them off, and shoots one of the soldiers. Chris keeps squealing and tells her that he loves her for saving his life. This ruins Chris’ cover, so Dan has to come clean about Queequeg. (Deborah is also stunned to learn that black people and white people are friends in 2016.)

Chris wants Deborah and Dan to go to 2016, while he fixes the past in 1775. Chris apologizes for misjudging Dan, who then tells him that he knows Chris can save the past. Dan then gives him a tin with weed in it. “Makes sense,” Chris says as the two run their separate ways.

What’s Next for ‘Making History’

The next episode of Making History airs on March 12 and is called “The Shot Heard Round The World.” We’ll definitely be tuning in because that was a fun pilot. Making History appears to be set up to run on two tracks – Deborah learns about 2016, while Chris makes sure the American Revolution starts on time.

Read More
FOX, TV
In the pilot for Making History, the Adam Pally-starring show sets up its own rules of time travel and a plot to save the American Revolution. Leighton Meester also stars.