On Sunday morning, rapper/singer Fetty Wap was involved in a shooting outside of a deli in New Jersey.

According to The Independent, police report that the suspect they currently have in custody is Raheem Thomas aka “Fuzz,” a fellow rapper who’s had a long and convoluted beef with Fetty Wap over the years. Fuzz even released a diss track against the rapper in 2015 titled “Got ‘Em,” and was taken in for questioning after he posted a picture of himself wearing Wap’s “1738” chain on social media.

Paterson, New Jersey police have made an arrest in connection with Fetty Wap's robbery and the subsequent shooting that left three men wounded on Sunday, March 26. According to TMZ, Raheem Thomas a.k.a. Fuzz, was taken into custody Monday, March 27. He had posted a photo wearing Fetty's stolen 1738 chain on his Instagram account, although he denied being the one who took it. In addition to the chain, Fetty was also robbed of cash. Thomas, the CEO of Muscle Team Entertainment, and the "Trap Queen" rapper have a "deep rooted" beef. Fetty, born born Willie Maxwell II, had allegedly been warned by Thomas to stay out of Paterson, even though it's his hometown. In January, Muscle Team Fuzz released a Fetty Wap diss video titled "Got Em" Remix. So far, Thomas is facing gun charges, but not robbery. #williemaxwell1738 #williemaxwellii #williemaxwell #monty #remyboyz1738 #monty1738 #fettywaprobbedinpaterson #fettywaychainedsnatched #fettywaprobbed #fettywap #muscleteamentertainment #muscleteamfuzz #raheemthomas #raheemfuzzthomas #fettywapvsfuzz #fettywapvsmuscleteam

TMZ has obtained footage of the moments leading up to the shooting, in which Fetty Wap and entourage are clearly seen trying to avoid confrontation. Fuzz, on the other hand, seen clearly in a white t-shirt and a red jacket, can be seen packing a firearm– the very same firearm that allegedly fired shots and wounded three people. He is currently being booked on charges of theft and aggravated assault. Watch the full clip below. 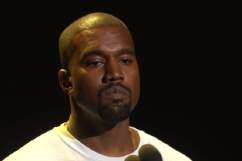 Is Kanye West Going to Be An ‘American Idol’ Judge?