There appears to be a little confusion about one part of Season 7 Episode 12, that showed a group of zombies surrounding something and eating it. This post will have spoilers through Season 7 Episode 12. Read on to find out more about the scene and what the zombies were eating.

At one point during the episode, Michonne was absolutely convinced that Rick had died. She turned around and saw a group of zombies greedily eating something that happened to be right where she had last seen Rick shooting. Then lo and behold, Rick appeared from a magic box he had somehow magically teleported into.

I thought they knew we knew it was the deer but we were supposed to worry about Michonne because SHE thought he was dead. https://t.co/c69fmSDDMa

So what were the zombies eating?

It appeared they were eating a deer (that terrible CGI deer), according to Rick’s comment shortly after his magical appearance, where he told Michonne that he stilled owed her a deer. What’s unclear is how the deer ended up there, since it was clearly running away the last time we saw it.

Did you think Rick was going to die? 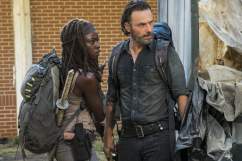 ‘The Walking Dead’ Live Stream: How to Watch Season 7 Episode 12 Online for Free