The situation between Tameka “Tiny” Harris, her rapper husband T.I. and his alleged side chick Bernice Burgos continues to spin out of control. Now, less than a month after they first went at each other on Instagram, the two women are back in the social media ring, and they are not being subtle.

According to Bossip, the fight started when Burgos posted a video clip of her and a friend dancing to an Xscape song– the very group that Harris rose to fame with during the 1990s. The clip clearly rubbed Harris the wrong way, and she responded in cutthroat fashion, writing “Funny… that Man U speaking of was laid up with his wife last night, so quite being petty cuse clearly u getting lied too if u thinking anything different. Hope u didn’t take him serious! Now keep sanging my sh*t! U know u a slick fan anyway.”

Unsurprisingly, Burgos fired back at Harris, first saying “We not about to sit here and argue about a n*gga hunny,” and then launching into her own rant about Harris and her legendary husband. “Okay you REALLY the grown u here HONESTLY I wasn’t even funny u know what’s petty? Me singing the biggie smalls verse that would’ve been really petty (referring to a Biggie line that called the girls from Xscape ugly).” Burgos continued her response, writing “Let me start off by saying you not even the old tiny from xscape you a whole new person. Fan? You been following me for some time now hun.”

“I wanted to keep all of this off the internet because this really isn’t me at all but you CLEARLY let this pretty face fool you,” mocked Burgos, “Where I’m from? We don’t type we really about that. And if you laid up with him then why you so pressed about me?”

T.I. has yet to comment on this public outburst. That being said, the rapper did recently announce his separation from Harris, telling Power 105.1 “She’s still one of the best friends I have in the world. I can just be a better friend than a husband. There is no beef, we good. We straight.” T.I., born Clifford Harris, added “We see each other, we speak, we talk, spend time together. We good.” Watch the interview clip below. 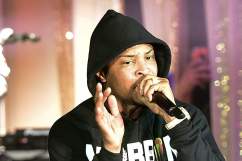