Tonight begins the live playoffs for season 12 of The Voice, with the top 20 performers competing for the top 12 spots. According to NBC, the way voting for tonight and tomorrow’s show will work is this:

Through innovative real-time voting on “The Voice” Official App and Twitter, fans will be able to advance two artists per team into the Top 12, and results will be revealed on the same night. During this exciting and music-filled night, two coaches will then immediately choose the final artist from their teams to save, sending the other artists home. 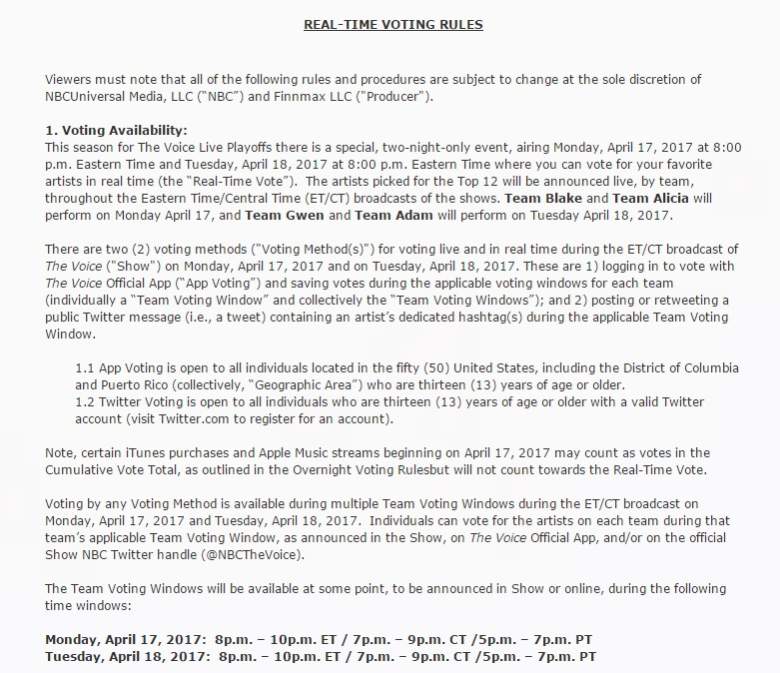 You can cast your votes via Twitter if you are following the @NBCTheVoice handle, which will announce the artists who are eligible. In order to cast a vote, your Twitter profile must be set to public. Tweet out a message with the appropriate contestant’s #hashtag in order to vote and there is one vote per Twitter ID allowed per Team Voting Window.

In addition to individual contestant voting, there will is the Team Voting Window. The voting window for this is completely in real-time tonight (8 – 10 p.m. ET/ 7 – 9 p.m. CT/ 5 – 7 p.m. PT). There is a limit of 10 votes per person via other forms of voting. For the Team Voting, you are able to vote via Facebook and general voting methods as well.

Twitter voting is available for all users over the age of 13 who have a valid Twitter account. And, when it comes to voting via Twitter, mistakes and misspellings are actually acceptable. Check out an example of the accepted mistakes in the below screenshot photo.

In order to vote using The Voice App click here to download it. The site allows you to download the app via Google Play, the Windows Phone Store and the Apple Store. The limit is 10 votes per contestant and per email address.

App voting is available in all states in the U.S. for people over the age of 13.

For even more details on the rules and guidelines of The Voice voting, click here. And for help with learning more about how to vote, feel free to email info@telescope.tv.

Read More
Reality TV, The Voice, TV
Tonight, viewers can vote in real-time for the live playoffs on The Voice 2017 via Twitter and the voting app. See the new season 12 process & how to vote.