David Ross, Rashad Jennings and Normani Kordei are each contestants in the season 24 finale of Dancing With the Stars, but only one of them can win. For a little while, Normani Kordei has been favored to win, but after Jennings’ amazing performances last night, there’s a good chance that he could take home the mirrorball trophy.

But, let’s not forget about underdog David Ross. Ross has been at the bottom of the leader board and knows what it feels like to be in jeopardy in the competition. Even so, the votes of his fans have carried him through to the finals and the judges have voiced that Ross is what this competition is all about. Plus, last night, he received a perfect score. Being the weakest dancer in the competition, one would think that Ross doesn’t have a chance. However, his spirit could very well get him that mirrorball trophy.

Going into the finale, Normani Kordei was actually too upset by the explosion at the Ariana Grande concert in Manchester to answer questions after the show, according to Hollywood Life. A source revealed that:

She refused to do all of the carpet as she was very upset over the news of the bombing. She didn’t want to talk about it at all because it involved her friend Ariana Grande. No tears, but she was visibly upset … She mentioned to Val (Chmerkoskiy) that you can’t control these things and she felt bad for everyone involved and was very sad.

Kordei did manage to take to social media to express her grief over the tragedy, saying:

While I am incredibly grateful for the turnout of our performance on @dancingabc tonight, the news about the horrific acts in Manchester are sobering and heartbreaking. Praying for the families and loved ones of those affected, and praying that through LOVE, we can overcome this. What the world needs now, is peace, unity, and LOVE.

After Rashad Jennings performed last night, the judges fawned over him and Bruno Tonioli said that his dancing was:

Refined, polished, majestic, smooth as silk. But what you did, you put romance in there and you had just the right amount of sexual tonality. Your footwork is unrecognizable. You really have become the polished diamond that everyone was expecting.

Your tireless pursuit of absolute personal best perfection is so amazing … but what’s special is you have magic happening. The thing that we can’t put words to, it’s happening right now. And this is what make’s winners winners. It’s amazing!

All three remaining finalists were praised for their performances last night. Who do you think will take home the mirrorball trophy? 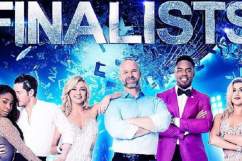 ‘Dancing With the Stars’ Finale 2017 Contestants

Read More
Dancing With The Stars, DWTS, Reality TV, TV
The season 24 finale of Dancing With the Stars airs tonight, with Rashad Jennings, Normani Kordei and David Ross in the mix. But, will the front-runners win?