Now that Cars 3 is in theaters, you might be wondering if you and your children really have to sit through the credits to see a scene at the end. The answer is yes, you do actually have to stay in your seats if you want to see every part of the movie.

After the credits are over, there is a gag scene that features Mater the tow truck, voiced by comedian Larry The Cable Guy. The scene is an extended version of a joke seen earlier in the film. He sings a song to the tune of “Davy Crockett” while he tries to make his junk sculptures.

This type of end credits scene is consistent with other recent Disney Animated and Pixar features. For example, Disney’s Moana and Pixar’s Finding Dory also included short joke scenes after the credits. Unlike scenes from Marvel movies, they don’t have anything to do with teasing future movies though.

The previous Cars film, 2011’s Cars 2, didn’t have an end credits scene, although there were scenes played during the above-the-title credits after the movie.

The original Cars film was made in 2006 and features several jokes playing on the left side of the screen while the credits roll. There was also a joke scene after the credits with the characters Minny and Van.

Cars 3 is the first Pixar film directed by veteran Pixar artist Brian Fee, who has been working at the studio since the original Cars film was in production. The cast includes Owen Wilson as Lightning McQueen, Larry the Cable Guy as Mater and Bonnie Hunt as Sally. Cristela Alonzo joined the cast as Cruz Ramirez, while Armie Hammer voices Jackson Storm. Nathan Fillion also joined the franchise to voice Sterling. In the film, McQueen tries to get back his former glory after losing a string of races.

The Cars films have been the ugly stepchildren of the Pixar canon, since both Cars and Cars 2 aren’t usually rated among their best films. Cars 2 is also the only Pixar movie not certified fresh on Rotten Tomatoes. (Somehow The Good Dinosaur even has a fresh rating!) Currently, Cars 3 is getting better reviews than Cars 2, with a 64 percent rating from critics. 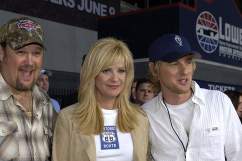 Read More
Cars, Disney, Movies, Pixar
Cars 3 is now in theaters and you will have to stay in your seats even as the credits roll. Find out what happens in the end credits scene.