In a video that surfaced late Friday night, Nicki Minaj‘s ex-boyfriend Safaree Samuels claims that he was jumped by rapper Meek Mill and his crew. “Saw Meek, he hopped out [of his car], then I just got snuffed,” he explains, “N***as jumped me.”

A second video clip above shows Samuels, dressed in all white, as he attempts to flee from a car pulling up the curb. A man wearing all black then chases Samuels down the street, before grabbing an unidentified man wearing a white shirt and black pants and throwing him to the ground violently. The group consists of roughly 3-4 men, which can be seen most clearly at the 0:49 mark.

Samuels also alludes to The Game in his video rant, a rapper who’s had a combative history with Mill, saying ” [You’re] being scared ‘cuse you’re still running from the f**king Game.” Despite the strongly worded Mill diss, however, it was Samuels’ comments about his own clean appearance that’s led to the most confusion and debate on social media.

“All white, I’m still clean and I still got all my s**t on.” Some have taken his words as the truth, but others are citing his lack of physical injury as proof that Samuels wasn’t actually jumped by Mill, and is using the situation as a publicity stunt. Check out some of the most skeptical reactions below.

Either Safaree is exaggerating or Meek Mill & his crew can not fight..b/c Safaree looking mighty clean after that "jump". ?? pic.twitter.com/0XtvWPfw6N

Safaree looking kinda healthy for someone who got jumped, he's either the king of the bob and weave or Meek needs boys that can fight

So, Meek Mill had his boys jump Safaree & Safaree had not one scratch, rip, or wriggle on him? pic.twitter.com/mHX4xO8Ici

Meek Mill crew jumped Safaree while he was wearing all white & it wasn't one blood stain on his garments. I see why Nicki left Meek lol

This is not the first time Samuels and Mill have had beef. After Samuels split from longtime girlfriend Nicki Minaj in 2015, she promptly got together with Mill, leading to bad blood between the two.

Later that year, Mill took Samuels to task in a series of tweets that referred to him as “scared” and a “fake,” in addition to saying Samuels’ then-girlfriend K. Michelle wasn’t “pretty.” Samuels clapped back at Mill, before Minaj came in to debunk his ambiguously worded response– making it crystal clear that their breakup was not an amicable one. Read the original Twitter exchange below.

If Ya girl ain't pretty you ain't real …..cuz you prolly telling that trash she bad so u being fake by lying to her lol

Show him the email you sent me on my birthday. If were not 2gthr u shouldnt be questioning me about old shit at all. thats not moving on.

He knows when u hit me. He sees the entire convo so don't purposely try to be misleading. That's corny if it's true. Wish u the best.

Samuels followed up the Twitter exchange with a Meek Mill diss song, “Lifeline.” On the song, he clowns Mill for his infamous (and unsuccessful) feud with Drake, saying “You dream about Drake numbers in your nightmares, but you hatin’ on me and my little career.”

He also claims that he’s still in Minaj’s thoughts: “No matter what you buy n***a I be right there, I’m in the back of her mind like a new n***a, I’m everywhere, TMZ making news n***a, I left and I don’t want it back, the proof is right here.” Listen to the full diss below.

Minaj and Mill have since broken up, but the rapper apparently hasn’t forgotten about Samuels as AllHipHop reports that there will be a response record on Mill’s upcoming mixtape Dreamchasers 4.5.

In an interview with TMZ, Mill denied having anything to do with the group who jumped Samuels. When asked about Samuels, Mill responded with a “Who?” before adding that “There ain’t no beef” between the two of them. Watch the video below.

To learn more about Samuels and Mill’s relationship, click below. 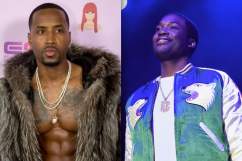 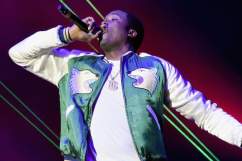