Cornell and Bennington were intertwined; they were musical geniuses prized for their vocals. Bennington was the godfather to one of Cornell’s children. They sang together. They were both tortured souls who poured angst into their haunting music. When Cornell died, Bennington was chosen to sing “Hallelujah” at his friend’s funeral.

Bennington’s letter to Cornell was raw and poignant. He posted the letter on his social media sites in May, when Cornell took his own life in a Detroit hotel room. It read:

I dreamt about the Beatles last night. I woke up with Rocky Raccoon playing in my head and a concerned look on my wife’s face. She told me my friend has just passed away. Thoughts of you flooded my mind and I wept. I’m still weeping, with sadness, as well as gratitude for having shared some very special moments with you and your beautiful family. You have inspired me in many ways you could never have known. Your talent was pure and unrivaled. Your voice was joy and pain, anger and forgiveness, love and heartache all wrapped up into one. I suppose that’s what we all are. You helped me understand that. I just watched a video of you singing ‘A day in the life’ by the Beatles and thought of my dream. I’d like to think you were saying goodbye in your own way. I can’t imagine a world without you in it. I pray you find peace in the next life. I send my love to your wife and children, friends and family. Thank you for allowing me to be a part of your life.

With all of my love.

Here’s the letter as it appeared on Bennington’s Twitter page.

Listen to Cornell singing “A Day in the Life” by the Beatles, the song that Bennington watched a video of his friend singing right before he wrote the letter:

Just when I thought my heart couldn't break any more…..I love you T

Here’s a photo of Chester Bennington singing at Chris Cornell’s funeral. Friends said he had never gotten over Cornell’s death.

GettyBrad Delson and Chester Bennington perform during funeral services for Soundgarden frontman Chris Cornell at Hollywood Forever Cemetery on May 26, 2017 in Hollywood, California.

Linkin Park dedicated the title track, One More Light, on its new album to Cornell.

Cornell and Bennington performed together.

You can read more about Bennington’s friendship with Chris Cornell here: 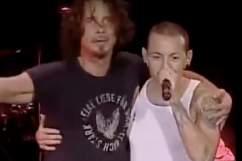