Kit Harington and Rose Leslie met while playing a couple on Game of Thrones, and it was after working together on the show that they became a couple in real life. This was all the way back in 2012, when Leslie started playing Ygritte, the wildling girl Jon falls in love with in the show’s second season. So what has been the latest update about the relationship between Kit Harington and Rose Leslie? Are they still together, even after Kit’s recent scenes with Emilia Clarke on Season 7 of Game of Thrones?

Yes, Kit Harington and Rose Leslie are still dating. In fact, Harington confirmed in an interview with Esquire that he and Leslie are now living together. He mentioned this while talking about the fact that he and his former roommate are both moving on to new places.

“He’s going off with his girlfriend and I’m living with my girlfriend,” Harington said.

A lot of details about the relationship between Rose Leslie and Kit Harington are not known, as the two are relatively private. In fact, we didn’t even know for sure that they were dating until 2016; before that, it was just a rumor for four years. In that interview with Esquire, Harington would not answer questions about his relationship with Rose Leslie, explaining that this is because “it’s as much her relationship as it is mine and I can’t speak for both of us.” He did say, however, that they are “very, very happy.”

That interview was conducted in May 2017. In early June, Harington appeared on The Late Late Show with James Corden, and by this point, his move was completed.

“I’ve moved in with my other best friend, Rose,” Harington said on the show. “So, I’m very, very happy and it’s going well.”

Harington went on to explain that Rose Leslie moved into his place, but he told her to feel free to change things to make it her own.

“She has all sorts of ideas for the house,” Harington said.

…I said to her, because she moved into my house, I said, ‘Darling, this is important that it’s our space, that it feels like our space and that you haven’t just moved into mine. Move anything you want around — change anything, chuck anything out’….I went to the shop, and I came back, and I said, ‘So what did you decide?’ She looked up and she said, ‘We’re moving the kitchen downstairs.'”

Nicole Kidman, who was also a guest on that Late Late Show episode, flat out asked Harington if he’s going to propose to Rose Leslie. Harington did not give a yes or no answer, instead saying, “Wow! …I’ve been put on the spot by Nicole Kidman.” He also said that he’s taking his relationship with Leslie step by step.

A rumor was circulating about a month ago that Harington and Leslie, both 30, had gotten engaged. Fans were really excited about the news, but it turned out that the rumor — started by Life & Style Magazine — wasn’t true. Life & Style had a detailed story, claiming that Harington had cooked Rose a candlelit dinner and proposed, and she cried and said yes. They even went into details about what their wedding would be like. Harington’s representative later debunked the whole thing. But Harington and Rose are still very much in love.

In a 2016 interview with Vogue, Harington recalled that his favorite memory of Game of Thrones was shooting the second season and falling in love with Rose Leslie.

“The three weeks in Iceland when we were shooting the second season,” Harington said. “Because the country is beautiful, because the Northern Lights are magical, and because it was there that I fell in love. If you’re already attracted to someone, and then they play your love interest in the show, it’s becomes very easy to fall in love…”

Between season five and season six of Game of Thrones, Kit Harington had to lie to the world and claim that he was not going to come back to the show; it was meant to be a surprise that Jon Snow was brought back to life after being murdered by members of the Night’s Watch. While Harington was generally good about keeping the secret, he did tell Rose Leslie.

When asked in an interview with Entertainment Weekly how long Rose Leslie knew he was going to come back to life, he said, “I told her from early on. In fact, Dan [Weiss, co-showrunner] said to David [Benioff, co-showrunner], ‘He’s going to tell Rose, isn’t he?’ She was allowed to know.”

Leslie successfully kept the secret for a full year.

“Of course you don’t want to lie to anybody’s face but I felt that it wasn’t my place to let the cat out of the bag,” Leslie told the Belfast Telegraph. “…I’d promised Kit I wouldn’t say anything. It’s just keeping your word, isn’t it.”

It was at the 2016 Olivier Awards that Rose Leslie and Kit Harington first made an appearance as a couple.

After Season 7 of Game of Thrones, fans began wondering if Emilia Clarke and Kit Harington had any kind of connection. But truly, their only connection is as friends and, of course, Emilia’s absolute delight that Harington and Leslie are a couple.

She once told Entertainment Tonight about Harington and Leslie: 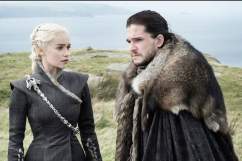 Read More
Game Of Thrones, Television
Kit Harington and Rose Leslie fell in love on the set of Game of Thrones, but whats the latest update on their relationship? Are they still together?