Spider-Man: Homecoming‘s 130-minute run time is jam packed with Easter eggs that reference all eras of Spider-Man’s history, as well as the past Marvel Cinematic Universe movies. If Robert Downey Jr.’s very presence as Tony Stark wasn’t enough to convince you that Homecoming really is part of the same universe as Iron Man, The Avengers and Captain America: Civil War, the Easter eggs will do the trick.

In an interview with ComicBook.com, director Jon Watts insisted that all the MCU Easter eggs weren’t forced upon him by Marvel chief Kevin Feige and Sony producer Amy Pascal.

“There’s no dictates really,” Watts told ComicBook.com. “It’s more just the ball is in my court to come up with as many fun things as I could, and just see how many we can squeeze into the movie, because everyone is just a fan. You’re working with the biggest fans in the world basically, so all of that stuff is welcomed.”

Here’s a look at many of the Easter eggs you’ll spot in the movie. Making sure you catch these is a good excuse to see the movie a second time.

Remember The Battle of New York?

It’s been five years since the Battle of New York in The Avengers, but it’s a big part of Homecoming. The Chitauri invasion is still having an impact on the Marvel world, as it inspired Adrian Toomes (Michael Keaton) to become the villainous Vulture. His salvage company specializes in cleaning up the debris the aliens left behind and he’s used it to create new tech.

The weapons used throughout the film are built around Chtauri tech. There are also weapons from an Ultron drone and Thor: The Dark World‘s Dark Elf arsenal. Shocker’s gauntlets are also based on Crossbones’ from Captain America: Civil War.

Tony Stark’s U.S. Department of Damage Control put Toomes out of business, so it’s a big part of Homecoming. The clean-up crew has been a part of the Marvel Comics universe since 1989. Homecoming is the first time they are seen in a movie, but Gizmodo points out that they were mentioned in an Agents of SHIELD episode.

Damage Control is run by Anne Marie Hoag, who is played by Cagney & Lacey‘s Tyne Daly.

Civil War… From a Certain Point of View

Another scene from the film shows Peter’s vlog of the fight in Captain America: Civil War. We see Happy Hogan (Jon Favreau) take Spidey to the airport and fly him to Germany to help Tony out. The Spider-Man: Homecoming Prelude comic also showed the fight from Spidey’s perspective.

During a class where Ned (Jacob Batalon) and Peter are talking about his life as Spidey, their teacher is trying to talk about the Sokovia Accords.

Although Stan Lee’s Guardians of the Galaxy, Vol. 2 cameos were cool, his Homecoming cameo is forgettable. He’s seen while Spider-Man is trying to pull off some super-feats and thinks he’s stopped a thief who’s really a man trying to get into his car. Lee yells, “Don’t make me come down there, you punk!”

The MCU Peter Parker (Tom Holland), who is only 15 years old, is a big Star Wars fan. He brought up The Empire Strikes Back in Civil War. And, as we see in the film and trailers, his room is filled with Star Wars toys. He also builds the LEGO Death Star set with Ned.

No, Uncle Ben isn’t mentioned in Homecoming by name, but Peter does mention that Aunt May (Marisa Tomei) probably couldn’t handle learning that he’s really Spider-Man after everything that happened to their family. Civil War established that it’s only been six months since Peter was bit by a radioactive spider and Homecoming is just two months after that. Therefore, May’s husband has only been dead for eight months.

Miles Morales, who became Spider-Man in the Ultimate Marvel universe (and was later introduced in the main Marvel continuity) is in Homecoming in spirit. Donald Glover, who voiced Miles in an animated series, plays Aaron Davis, Miles’ uncle. “The Prowler” is listed as one of Aaron’s aliases, a reference to him being The Prowler in the Ultimate comics. In Homecoming, Aaron is a small-time criminal. Even Davis’ licence plate – UCS-M01 – is a reference. Miles Morales debuted in Ultimate Comics Spider-Man #01!

Mac Gargan (Michael Mando) appears in Homecoming. Gargan later becomes Scorpion after J. Jonah Jameson hired him to figure out how Peter Parker got great photos of Spider-Man. Since Jameson isn’t part of Homecoming, it’ll be interesting to see how Gargan becomes the character in future movies. Gargan also shows up in a mid-credits sequence to meet Toomes.

The Mysterious Case of MJ

Zendaya’s character Michelle Jones is definitely not meant to be Mary Jane Watson. However, she is nicknamed “MJ,” so that is a reference to Peter Parker’s comic book flame. The line “Go Get ‘Em, Tiger!” also appears in the film, but on school banners instead of being said by Mary Jane.

There are plenty of other little references and nods to the comics. In once scene, Peter tries to lift himself out of the rubble, recreating the iconic Amazing Spider-Man #33 cover. At the end of the movie, Tony offers Peter a metallic suit that references the red-and-gold Iron Spider armor. There’s also a reference to Thor’s magic belt, explained here.

MoviePilot points out that there’s graffiti on the wall referencing “Bagley.” That’s a shout-out to artist Mark Bagley, who drew parts of The Clone Saga and worked with writer Brian Michael Bendis on Ultimate Spider-Man. During a TV report, Spider-Man is referred to as “Man-Spider,” which refers to that time Peter Parker was actually turned into a giant spider.

There’s also a reference to Vibranium, the material that Captain America’s shield is made, during the bus ride to Washington, D.C. The material is only found in Wakanda, the home of The Black Panther. 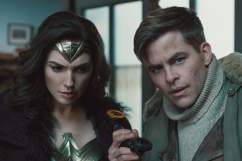