This shouldn’t come as a surprise to anyone, but Spider-Man: Homecoming does include a cameo from Stan Lee. In the film, he plays a character named “Gary.”

We see Gary when Spider-Man is fighting crime in Queens and he accidentally tries to stop a bystander who he thinks is steeling a car. The character is an annoyed neighbor who tells Spidey to keep the noise down after he mistakes a person getting into a car for a thief. In the film, he’s heard yelling, “Don’t make me come down there, you punk!”

Lee also made a cameo in the Homecoming NBA Finals TV Spot, seen below.

Lee, who is now 94 years old, was the executive vice president and publisher of Marvel. He co-created Spider-Man with artist Steve Ditko in 1962 and the character quickly became the publisher’s most popular character.

Jack Kirby also allegedly had a role in the creation of the Friendly Neighborhood Spider-Man, sparking a long-running debate among comic fans about who exactly created the character. As i09 pointed out in 2009, Lee has said that Ditko was the main co-creator for Spider-Man, even designing the familiar costume we all know. Kirby did create a character called The Fly in 1959 with Captain America co-creator Joe Simon that grew out of the idea for a “Spiderman,” not Spider-Man. (Ditko, now 89, also wrote an article on the controversy found here.)

“Stan Lee and Steve Ditko created the Spider-Man that we are familiar with today. It’s safe to say that Joe Simon did indeed create his own Spiderman in the early 1950’s,” illustrator and college professor Al Nickerson wrote in 2009. “However, there doesn’t seem to be any substantial proof to support the idea that Jack Kirby later took Joe Simon’s Spiderman to Stan Lee.”

Lee has made cameos in almost every Marvel movie since 2000, including the 20th Century Fox X-Men movies, the previous Sony Spider-Man movies and the Fox Fantastic Four movies. He even appears in Disney Animation’s Big Hero 6, which is based on a Marvel comic.

The only Marvel movie made since 2000 that doesn’t include a Lee cameo is 2015’s box office bomb Fantastic Four. Lee told Larry King in September 2014 that he thought FF flopped just because he wasn’t in it. (Never mind the fact that it was also a terrible movie.)

Lee has made so many cameos that it became a joke in Guardians of the Galaxy, Vol. 2. In the film, he appears with The Watchers, and references the popular fan theory that he plays the same character in every movie. 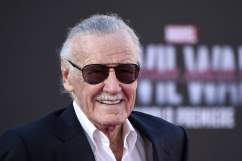