Angelina Green is a young, 13-year-old singer on America’s Got Talent and when she first performed on the show, she explained that music helped her get through her parents’ divorce. After her performance of The Pretenders’ song “I’ll Stand By You,” judge Heidi Klum gave her the golden buzzer, sending her straight into the live shows.

Green has said that her mother is her best friend and that she is very supportive. She is self-taught and can play the piano, guitar and ukulele. Green composes her own music and dances as well. In an interview with People, Green opened up about her parents’ divorce, saying:

When things weren’t going so well in the house, I would always go to my room and play my music or my guitar or my ukulele. I feel like music helped me escape to another world and I would forget about all my worries. Music was always there for me. It was really important to me. You don’t really choose your story. It’s something that happens to you. I know there are some kids out there who feel like they can’t go on anymore, but they need to know that they can.

Green says she hopes to make her family proud by being on AGT and wants to show judge Heidi Klum that she made the right decision by giving her the honor of golden buzzer. And, according to Green’s NBC bio, her mission “is to inspire kids who are also going through hard times and help them to overcome obstacles using music.”

Hanging out backstage #agt with my best friend! #Hero ♥️?? 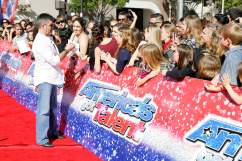