Near the end of Game of Thrones Season 7 Episode 6, we see Jon’s wounds up close again. And they look a lot worse than we remembered. Here are photos from that scene.

MAJOR spoilers through Season 7 Episode 6 in the article below.

When Jon made his way back after escaping the wights, he was nearly frozen to death. As his friends worked to save his life, we saw his wounds all over again. We could see all the stab wounds that took his life, including how he was stabbed

His wounds looked a lot cleaner when he was first resurrected. But then, he has been through a lot, so maybe that is why they look worse right now.

We know that when someone is raised from the dead by the Lord of Light, their wounds don’t heal. That’s why Beric still has to wear a patch over one eye. He was stabbed through an eye once, and that wound has never healed. He’s still blind in one eye.

George R. R. Martin said in an interview just before the season premiered that Beric is a wight animated by fire. He even went so far as to say that Beric’s heart doesn’t beat. But they breathe, and that’s how you can tell the difference (according to Jon.)

For some reason, because they are technically “undead,” their wounds don’t heal. (However, some fans have pointed out that Beric’s wounds had to heal at least to some degree or he wouldn’t be able to use one of his arms. So it’s unclear what the difference is in what scars over and what heals, at least a little, versus what doesn’t heal at all.)

Seeing the wounds did have a huge affect on Dany. She realized that those rumors about Jon were true. And she realized all that he has suffered to help his people. Just like she has suffered so much to help her people and to free the slaves. 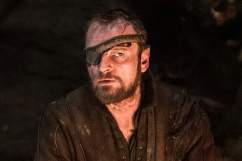 Read More
Game Of Thrones, HBO, TV
Jon's wounds are unexpectedly bad. See photos here from that scene and an explanation of why he looks the way he does.