Rogan made the announcement via his social media accounts.

Rogan also announced an already sold out after-party show at The Comedy Store. Rogan, Diaz and Segura are scheduled to perform stand-up at the event which starts at 8:00 p.m..

“The Joe Rogan Experience” is a twice-weekly long form conversation with guests that is one of the most popular comedy podcasts on iTunes. The podcast’s Youtube channel, PowerfulJRE has over 1.5 million subscribers. The podcast was voted “Best Comedy Podcast” by iTunes users in 2012 and received a Stitcher Award in 2014. The podcast averages over 16 million downloads per month, according to Gazette Review. Recent guests on the podcast include Ben Shapiro, Eddie Bravo, Jamie Foxx, Nick Swardson, Dorian Yates and Maynard James Keenan.

Rogan has been a stand-up comedian for more than 20 years, and sells out theaters all over the world. His comedy special “Joe Rogan: Live from the Tabernacle” was released in December 2012 via his website. Rogan previously starred in two hour long specials, “Talking Monkeys in Space” (2009) and “Joe Rogan Live” (2007), and released the CD’s “Shiny Happy Jihad” (2007) and “I’m Gonna Be Dead Someday” (2000). Rogan’s most recent stand-up special, “Triggered”, was released on Netflix on October 21, 2016.

Rogan is also a UFC commentator, television host, actor, podcast host and retired martial artist. He has studied karate, kickboxing and taekwondo. He became a black belt and is a four-time state champion and U.S Open champion in taekwondo. He started working for the UFC as an interviewer and has been a color commentator for many of its pay-per-view events and highlight programs since 2002. 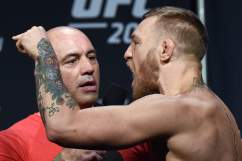