Shawn Mendes walked the red carpet at the MTV Video Music Awards, where he had the chance to take home more than one moonmen. The 19-year-old Canadian sensation performed “There’s Nothing Holdin’ Me Back” during the show. Here’s a look at photos of Mendes arriving at The Forum in Inglewood, California and his performance. Mendes looked sharp in a dark suit.

GettyShawn Mendes on the Red Carpet.

Mendes was nominated for two VMAS. “Treat You Better” was nominated for Best Pop Video, while “There’s Nothing Holdin’ Me Back” was nominated for Song of the Summer. Although these are Mendes’ first VMA nominations, he already has two Nickelodeon Kids’ Choice Awards, a People’s Choice Award, four MTV Europe Music Awards and four iHeartRadio Much Music Video Awards. He also has a star on Canada’s Walk of Fame.

GettyShawn Mendes performs at the VMAs.

Mendes became a star thanks to his viral videos on Twitter’s now-defunct Vimeo short-form video sharing platform. But Mendes has outlived that service’s demise thanks to two hit albums. Handwritten and Illuminate both topped the Billboard 200 Album chart. Illuminate includes the hits “Treat You Better,” “Mercy” and “There’s Nothing Holdin’ Me Back.”

THIS BEAUTIFUL MAN IS GOING TO HIT THE BEST HIGH NOTE TONIGHT ITS GOING TO BE THE MOST ICONIC MOMENT OF 2017 #vmas pic.twitter.com/7DveNYoA8B

In a recent interview, Mendes explained that “There’s Nothing Holdin’ Me Back” was actually based on characters in a movie script he was given to read.

“I was reading a movie script that I was possibly going to be in and the girl who ‘my character’ kind of falls in love with, I actually really loved, like I really liked the character,” the singer said. “I wrote the song about her [the character]. So it’s not a real girl, that one isn’t a real girl.”

One of Mendes’ idols is John Mayer. When Mayer was in Toronto, he invited Mendes onstage to perform “Mercy” and Mayer’s “In Your Atmosphere” together.

“[Performing with Mayer] was obviously incredible. As a person I really relate to him and I think he’s awesome,” Mendes told People Magazine. “He’s a dude I can call — for him to be like, ‘Hey man, how’s life? You’re gonna be fine.’ And my anxiety levels down to a one instead of a 55. That’s something that’s really nice.” 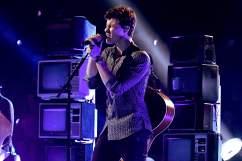 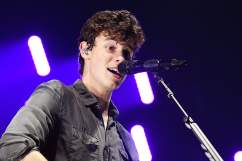