SYDNEY, AUSTRALIA - NOVEMBER 28: (EDITORS NOTE: Image has been converted to black and white.) Taylor Swift performs during her '1989' World Tour at ANZ Stadium on November 28, 2015 in Sydney, Australia. (Photo by Mark Metcalfe/Getty Images)

Taylor Swift is back. The pop singer has seemingly ended her hiatus and confirmed the one thing that fans have been dying to hear: her new album is on its way.

After a tidal wave of information hit on her Instagram account, Swift now has the internet in a collective tizzy, eager to hear her impending lead single and catch a glimpse of the artwork for her new album.

Here’s what you need to know about Taylor Swift’s new album Reputation:

Swift rocked the internet on Wednesday morning when she announced that the title of her album will be Reputation. Excluding the fact that it aligns with her previously one-word titled albums (Fearless, Red, 1989), it also speaks to a larger perception of her as a pop singer. And frankly, few singers in the mainstream have as defined a reputation as Taylor Swift.

As noted by Bustle, Swift is known for making headlines, whether it’s regarding her ongoing feud with Kanye West, her cold war with Katy Perry, or her numerous celebrity romances. Even as she’s gone into hiding for the better part of the year, media outlets blew up when her relationship with actor Joe Alwyn went public.

Titling the album Reputation has many fans assuming that Swift will address how she’s aware of how she’s perceived over the past few years, and that she has plenty to say about it.

2. She Released a Series of Promotional ‘Snake Videos’ on Social Media

After wiping all of her social media accounts, Swift began to peak the interest of fans when she began posting cryptic videos of snakes on Instagram and Twitter. While many were initially confused, it became clear that these “snake videos” were another way that Swift was acknowledging her reputation as a “snake” to other celebrities.

Throughout the years, she’s been accused of being dishonest to others, most notably producer/ex-boyfriend Calvin Harris, and Kanye West.

On his 2016 single “Famous“, West rapped the lines “I think me and Taylor might still have sex / I made that b**ch famous.” Swift claimed that she was insulted by these lyrics, and that she was not consulted about them prior to release.

This claim came back to bite her, however, as West’s wife Kim Kardashian posted a recording of a conversation that allegedly proves she was aware of the lyrics beforehand. You can listen to the clip here.

On a less critical note, snakes are also known for shedding their skin– a metaphor that Swift fans (or “Swifties”) have been pointing to as a possible hint towards the sound of the new album. Could Swift be shedding her “snake” reputation and starting fresh?

3. Swift is Said to Be ‘Overhauling Her Image’ With This Album

This plays off of the reinvention angle that fans have been lobbying for, right down to the fact that Swift has removed her profile photos from her social media accounts. A source close to the singer seemed to confirm this to Us magazine, as they said: “The single is very different. It goes from very soft, to hard, to soft again. Taylor is overhauling her image.”

When asked if the single sounds anything like Swift’s last album 1989, they said “It doesn’t sound like anything she’s done before. It’s a little unusual. She plays around with new sounds each album cycle, but this one in particular stands out.”

This could also include new collaborators. Rumors have been circling around a possible duet between Swift and Drake according to Page Six, with the two appearing together at a party in October 2016. Given their mutual admiration for one another, as well as the Apple Music commercials in which they work out to each other’s hits, it wouldn’t be a shock to find out they’ve already recorded music together.

According to Vulture, there is also a chance that Swift is moving towards a more “urban sound” with a “real mix of edgier hip-hop and R&B sounds.” Aside from her duet with ZAYN (“I Don’t Wanna Live Forever“), however, there is little to support this theory. Vulture also says that Swift may have recorded music with Kesha in Nashville.

4. The First Single Will Be Released Tomorrow & Is Possibly Titled ‘Timeless’

Swift dropped another, more immediate bombshell on Wednesday when she announced that her lead single will be released tomorrow evening. The “Shake It Off” singer neglected to mention a title, but thanks to some internet snooping, there is a pretty good chance it will be called “Timeless.”

The “Timeless” theory took shape even before Swift announced the single’s release date, and stems from the fact that the mysterious website www.timeless.com appeared on Monday. If searched, it takes you to a black homepage with white cursive text that reads “Timeless” and “Coming Soon.”

In addition to this clue, The Telegraph reports that “Timeless” has been registered under Swift’s name on an official music publishing site. It is unclear whether the song will premiere on iTunes (as a possible Apple Exclusive) or on the “Timeless” website.

The third, and most important announcement made on Wednesday was that Reputation is scheduled for release on November 10th. While this may disappoint fans who were expecting to get the entire album as a surprise release like Beyoncé, this release date actually lines up with Swift’s other albums. Nearly all of her official releases have come out in either November or October, and based on her 30 million units sold worldwide, its a formula that seems to work.

Swift also released the rumored album cover for Reputation on Instagram, which you can check out here. The black-and-white image shows Swift staring into the camera while her name repeats in various fonts and sizes behind her. 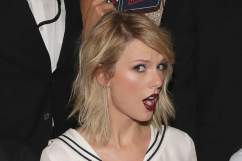