Jennifer Lawrene’s new movie mother! is now in theaters. The mind-bending horror movie was directed by Darren Aronofsky, the same filmmaker behind Noah, Black Swan and The Wrestler. Although you’ll probably want to stay in your seats wondering what it was you just saw, you don’t have to. That’s because there is no scene after the credits are over.

Once the 121-minute movie is over, you can leave the theater. There’s nothing after the credits. However, Aronfsky revealed in a recent Reddit AMA session that there is a good reason to stay for the credits. They will help you understand why the movie is called mother! and not Mother.

After someone asked why the film has an exclamation point and a lower-case title, the director explained:

hey guys first answer. there’s gonna be a lot of spoilers coming out. so if you don’t wanna have the film spoiled, tread lightly. the film plays well as a mystery. until hopefully by the end you’re asking wtf? ok. spoilers commence. to find out why there’s a lowercase m read the credits and look for the letter that isn’t capitalized. ask yourself what’s another name for this character?

The Independent notes that you can find another character with a lower-case name in the credits. Ed Harris’ character is simply listed as “man,” possibly meaning that his character represents all men, not just one particular “Man.”

mother! has earned mixed reviews, with some critics thinking Aronofsky, whose credits also include Requiem for a Dream and Pi, may have pushed the envelope too far. But that was his intention.

“I started with wanting to return to Black Swan territory and make something scary again,” he wrote on Reddit. “_ thought the home invasion drama is something that everyone could relate to. I also wanna make a metaphorical connection to not your home, not my home, but OUR home.” 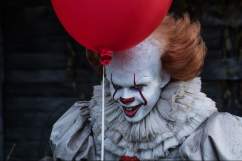 ‘It’ Spoilers: Is There an End Credits Scene?