GettyStephen Colbert, , winner of the Best Writing for a Variety Series Award and the Variety Series Award for ‘The Colbert Report,’ and his wife Evelyn Colbert attend the Governors Ball during the 65th Annual Primetime Emmy Awards at Nokia Theatre L.A. Live on September 22, 2013 in Los Angeles, California.

Stephen Colbert married his wife Evelyn McGee-Colbert in 1993 and according to Huffington Post, Colbert met his wife while he was figuring out whether or not to marry a woman he’d been dating for a few years. On an episode of Colbert’s talk show, he revealed that he met eyes at the opening of Philip Glass and Allen Ginsberg’s opera.

On an episode of The Late Show in February 2017, Colbert brought his wife out on stage and gave her a big smooch in front of the crowd and guest Leslie Mann. Check out the video clip of the moment below.

In the past, Colbert’s wife also appeared with him on an episode of Strangers with Candy.

This past May 2017, while attending the Met Gala, McGee gushed about her husband via Instagram, writing:

He’s so sexy. And he taught me the importance of being silly. Being silly is so important. Silly is the opposite of grief. It’s throwing yourself into a moment without care. You can’t always maintain your status as a dignified person — it gives you blinders. When you always expect the world to fulfill your expectations, it wears you down. It closes you off. So sexy.

Together, Colbert and his wife have three children – Madeleine, Peter, and John.

GettyStephen Colbert, wife Evelyn Colbert and sons Peter Colbert and John Colbert pose with Goofy outside the Soarin Over California attraction at Disney California Adventure park in on August 28, 2010 in Anaheim, California.

While talking about his daughter and the funny parts of parenting, Buzzfeed reports Colbert saying:

I think one of the most startling moments was when my then 6-year-old daughter won an argument in the most wonderful way. Our third child had just been born, and my wife had just about had it. So I said, ‘Go out with friends and I’ll watch the kids for the night’ … And five minutes later, all of them were crying, and I was yelling. And my daughter said, ‘Why are you yelling at us?’ and I said, ‘I’m trying to discipline you!’ And then she looked up at me with her tear-stained eyes and said, ‘This is how you teach children, by making them cry.’ And it was such a clenching reminder — she won not only the argument, but she won life with that statement. I just burst out laughing, and I think they were so surprised that I burst out laughing, that they did too.

As for Colbert’s parenting skills, he hoked:

That’s my parenting style — ‘Go watch the TV.’ I’m one of 11 children, and my mother’s parenting style was ‘There’s the TV. Go watch it. Mommy’s got 10 other people to take care of.’

Together, Colbert and his family live in Montclair, New Jersey. 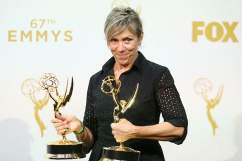