Joe Jonas and Sophie Turner are engaged! Jonas made the announcement on his Instagram page on Sunday afternoon, showing off a photo of Turner’s engagement ring. Jonas captioned the photo with a very clear message, “she said yes.” Turner posted the same photo and captioned her post with, “I said yes.”

Within minutes, social media lit up with all kinds of messages about the couple’s exciting news. Twenty minutes later, over 200,000 people had “liked” Turner’s post.

Engagement rumors hit the web back in April when Turner, 21, and Jonas, 28, were spotted out on a date and Turner was wearing a ring on that finger. According to The Sun, the two were enjoying a night out at Craigs, a popular Hollywood hotspot, when the ring was first spotted. It’s unclear, based on photos, however, whether the ring from that particular night is Turner’s pear-shaped bauble.

The Game Of Thrones actress and her musician beau (who is part of the group DNCE) started dating in the fall of 2016. The couple has kept their romance very private over the years, but things have been serious for a while now. In fact, Turner met Jonas’ parents the same year that they started dating. According to People Magazine, the couple traveled to California’s Mammoth Mountain to celebrate Thanksgiving with Jonas’ family, which was a big step, especially so early on in their relationship.

Interestingly, Turner had a crush on the Jonas brother for quite some time before the two started dating officially. A source said that Jonas thought that Turner was “cool.” It didn’t take long for the two to fall in love.

“He thinks she’s a cool girl. She’s always been into him, but he’s starting to like her more and more,” a source told People Magazine back in 2016. 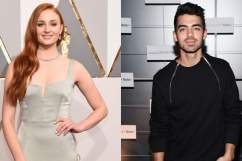