Tom Petty has died, according to People Magazine. His manager released the following statement to the outlet, confirming the legendary musician’s passing.

“On behalf of the Tom Petty family we are devastated to announce the untimely death of of our father, husband, brother, leader and friend Tom Petty. He suffered cardiac arrest at his home in Malibu in the early hours of this morning and was taken to UCLA Medical Center but could not be revived. He died peacefully at 8:40p.m. PT surrounded by family, his bandmates and friends.”

News that Petty had died was incorrectly reported on Monday afternoon by CBS, the site claiming to have gotten word from the Los Angeles Police Department. However, that report has since been taken down. The LAPD posted the following tweets after the report surfaced in an effort to clear things up.

(1/2)The LAPD has no information about the passing of singer Tom Petty. Initial information was inadvertantly provided to some media sources

(2/2) However, the LAPD has no investigative role in this matter. We apologize for any inconvenience in this reporting.

Here is what you need to know about Petty’s death:

1. Petty Was Found Unconscious in His Home on Sunday

According to TMZ, Petty was at his Malibu home on Sunday when he went into full cardiac arrest. Emergency personnel were called, but when they arrived to the home, Petty was unconscious. Although he was not breathing, law enforcement officials said that EMTs were able to get a pulse on him.

Cardiac arrest refers to the “abrupt loss of heart function in a person who may or may not have diagnosed heart disease. The time and mode of death are unexpected. It occurs instantly or shortly after symptoms appear,” according to the American Heart Association.

Not everyone who suffers a heart attack goes into cardiac arrest and vice versa.

It is unknown if Petty had heart disease or if he suffered a heart attack before going into cardiac arrest.

2. Petty Was Rushed to the Hospital & Put on Life Support

According to TMZ, Petty’s wife called 911. The 911 recording can be heard below.

Soon after EMTs arrived at his home, they rushed Petty to UCLA Santa Monica Hospital. Sources told TMZ that Petty was in critical condition and was immediately put on life support.

People are put on life support — also known as a ventilator that is used to help someone breathe — when their bodies are unable to keep oxygen flowing. During this time, a person’s vitals are monitored and their brain activity can also be checked.

TMZ confirmed that Petty was taken off a life support this morning as he hadn’t been showing any brain activity. The site confirms that the family has a “do not resuscitate” order on Petty, which was likely the reason that he was removed from the ventilator today.

“A DNR is a request not to have cardiopulmonary resuscitation (CPR) if your heart stops or if you stop breathing. Unless given other instructions, hospital staff will try to help any patient whose heart has stopped or who has stopped breathing,” according to Family Doctor.

3. Petty Fell Ill Back in August & Had to Reschedule a Couple of Shows

Back in August, Petty was forced to cancel a couple of shows with the Heartbreakers due to laryngitis and bronchitis, according to Mercury News. However, he was able to recover and the shows that he missed were rescheduled.

“Tom is indeed feeling better & we want to reassure those of you planning to go the shows in NorCal this week that all systems are go,” read a tweet from his account. He went on to finish the 40th anniversary tour with the group last week. He played his very last show at the Hollywood Bowl late last Monday.

4. Petty Wanted to Go on Another Tour

In an interview with Rolling Stone, Petty talked about his plans after he wrapped with The Heartbreakers.

“I started talking about that the other day and got a loud, ‘Shut up!’ Every time I bring it up it hits a wall somewhere. But we’re done in August. After that, it’s not out of the question I’d get the box set together and take it on the road to theaters before the end of the year,” Petty told Rolling Stone.

5. Petty Is Survived by His Wife Dana York & His 2 Daughters From a Previous Marriage

Petty married his wife, Dana York, in 2001, and he was the proud father of two daughters, Adria, 42, and Annkim Petty, from his first marriage to Jane Benyo.

Petty first met York at one of his concerts in Texas. However, the two didn’t start dating until several years later. The two started dating in 1996 and eventually tied the knot in Las Vegas.

According to Rolling Stone, the two “were married on June 3 in Las Vegas, following the head Heartbreaker’s two sold-out shows at the Hard Rock Hotel on June 1st and 2nd. According to Petty’s rep, the musician, his bride and a few close family and friends remained in Sin City for their wedding on Sunday. Following the rather low-key ceremony (no, they were not married by an Elvis impersonator), the rather raucous party of twenty descended on Ruth’s Chris Steakhouse in Las Vegas to celebrate.”

After midnight on Tuesday, Annakim posted the following photo on Instagram. 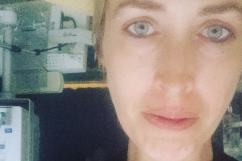