Cardi B took to Instagram Live to post what appeared to be a sex video of herself and her fiance, Offset. The video has expired from Instagram Live, but has made its way online, causing an internet frenzy.

A rep for Cardi B told TMZ that the video was just a joke and that Cardi B and Offset weren’t actually having sex.

“We’re told the ‘sex video’ isn’t real … it was all a joke. We’re told they weren’t actually banging, and were fully clothed in the video,” TMZ reports.

In the clip, Cardi B is with her fiance, Offset, and the two look like they are engaging in sexual intercourse, despite both wearing clothes.

“I don’t got no more in me left. You gotta give a whole hour,” Cardi B can be heard saying in the video, appearing to be mid-intercourse.

The video was posted just days after a couple of scandals hit the internet, leading some fans to think that Cardi B posted the “joke” sex video as a response to the negativity surrounding her relationship. Perhaps this was her way of letting everyone know that she’s not too worried about what’s out there on the internet — and that she’s still very much in love with her man.

On December 22, Page Six reported that an alleged sex tape belonging to Cardi B hit the internet the very same day that the “Bodak Yellow” rapper released her latest single, “Bartier Cardi.”

“The video is said to be a ‘preview’ to a more explicit sex tape. In the video, one can see Cardi B smiling, laughing, twerking, and bending over for the camera,” reported Page Six.

The video was also posted after Offset was accused of cheating on his bride-to-be. The rumors surfaced on Christmas Eve after hackers accessed Offset’s iCloud account and obtained some curious video footage.

“According to the buzz, the Migos member’s iCloud account was recently allegedly hacked, and there is video of a naked woman in a hotel room from September. The woman appears in the nude, in a bathroom, and the ‘Bad and Boujee’ rapper is said to be the one filming,” reports XXL.

On Christmas Day, an unimpressed Cardi B took to social media to respond to the leaked videos.

“People keep posting the nude videos of me like if I wasn’t a stripper before. You know there’s videos of me stripping with my [t*tties] & a** out on YouTube already right? Anyways I know I know I got a nice body right,” she tweeted.

Cardi B and Offset got engaged in October. Offset popped the question while onstage at Power 99’s Powerhouse concert in Philadelphia, presenting her with an impressive, 8-carat pear-shaped diamond ring.

“Jesus Christ I’m so emotional, @offsetyrn I loveee you so much .Thank you for seeing the potential in me since you met me. For giving me advice molding me and loving me .Your such a amazing man to me your family ,friends ,kids and you are extremely talented.I can’t wait to spend FOREVAAAA with you. Lets make a lot shmoney and love together (sic),” Cardi B wrote on Instagram at the time, showing off her new bauble. 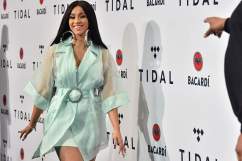