Josh Batterson and his girlfriend Aika are a couple on the show 90 Day Fiance and Aika has been criticized online by viewers as a possible gold-digger. Batterson was previously married to a woman named Mel, according to Reality Blurb and it was not smooth sailing for the couple when they were together. In March 2010, Batterson was reportedly arrested for domestic violence after allegedly punching a woman in the face. This woman was reported to be ex-wife Mel, who he started dating in 2008, according to In Touch Weekly. The couple married in 2012 only to divorce in 2013. Batterson and his ex-wife had no children together, though he had two kids from a previous relationship. When it comes to Batterson’s altercation with his ex, Reality Blurb reports that police had to push in the door after hearing Mel screaming. Batterson also allegedly “pushed her down a small embankment outside their apartment building.” In Touch Weekly said the case was dropped when “the woman” would not cooperate, but ex-wife Mel did tell Reality Blurb that, “He did punch me in the face that night for sure. I didn’t press charges because it was the first incident and I was stupid and in love … He had too much to drink. I do believe he was getting too friendly with a girl friend of mine and that got me upset.” She has claimed this wasn’t Batterson’s only violent incident with her.

According to Batterson on 90 Day Fiance, his ex cheated on him, but Mel says this is not the case. She also says he has no connection with his children, explaining that, “Josh got a vasectomy way before we met. He never wanted kids. This is why he doesn’t have a relationship with the two he has, and why he never paid his child support.” In the same Reality Blurb interview, Batterson’s ex-wife says that she believes people are capable of change and that she doesn’t know Batterson in his current life. Batterson has been married a total of three times as he is now married to Aika, who viewers have met as his girlfriend on 90 Day Fiance.

Fighting with his ex-wife is not Batterson’s only arrest or legal issue. Starcasm reports that in 2014, Batterson had financial problems with Capitol One, but since resolved the issues and paid what he was required as his wages became garnished from 2014 – 2016. Also, back in 2007, Batterson was arrested in Florida for a DUI.

While Batterson has his checkered past, he is not the only 90 Day Fiance cast member this season with a record. Molly Hopkins, who is dating a much younger man named Luis from the Dominican Republic, has an arrest record either, according to The Inquisitr. According to Starcasm, Hopkins did not even have her license when she began filming the show because it was suspended after several drinking-and-driving incidents. She also has several mugshots floating around on social media that range from the year 2008 to 2012. Her arrests were related to possession of marijuana, driving violations and DUIs. Click here to view Hopkins’ most recent DUI violation on June 17, 2016. Hopkins also has several speeding tickets under her belt. 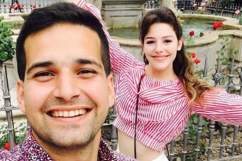 Read More
90 Day Fiance, Reality TV, TV
Josh Batterson of 90 Day Fiance has a criminal record with multiple arrests and a mugshot. On the show, he is hoping to marry girlfriend Aika.