AMC When does The Walking Dead return?

This first half of The Walking Dead‘s Season 8 has been fascinating. We lost some very beloved characters and had some scenes that are still haunting some fans. I, for one, will likely never forget that scene with Shiva, which brought tears to my eyes. We also had that amazing episode with Negan and Gabriel. The two really play off each other quite well, and Gabriel is constantly on the hunt for a bigger purpose to his life. But now that the first half of the season is ending far too quickly, when will the show return for the final episodes of Season 8?

UPDATE: According to Talking Dead, the show is returning on February 25.

The Walking Dead typically returns with the second half of its new season in February. As of the time of publication, AMC hadn’t announced a return date yet. Usually at the end of the midseason finale, they’ll announce the month that the show is returning but not the date. Once the finale ends tonight, we’ll know if they stick to that pattern. Until then, we can look at previous seasons to get a better idea of the exact date that the show will return.

In previous years, the second half of each season started in February, no matter whether the midseason finale was aired in November or December. Season 1 is the only exception, and that’s because it was only six episodes long. Here’s when the midseason premiere aired for previous seasons:

If you want to analyze this a little bit more, The Walking Dead’s second half of every season premiered the second Sunday of February, every season except Season 1. So if we continue that same pattern, then the show will be returning most likely on February 11, 2017.

While we wait for the show to return, we can also speculate a bit on how Morgan is going to be brought onto Fear the Walking Dead‘s next season. Fans love Morgan and are excited to see Lennie James even more. But it’s unclear how the showrunners are going to make it work between the two show’s timelines. How does Morgan have time to travel all the way to see the characters in Fear? And why? Fear the Walking Dead is currently filming in Austin, Texas and that’s where Lennie James will be filming his first scenes.

Morgan spent most of his time in King County, Georgia. There are 963 miles between King County and Austin. According to Google, that would be a 14 hour drive or a 303 hour walk. (Of course, first you’d have to acquire a car with enough gas. Then you’d have to find empty roads. And then you’d have to have great conditions where walkers and people didn’t slow you down or stop you.) Or it’s a 303 hour walk. That’s 12.5 days if you somehow managed to walk nonstop without ever sleeping. If you walked 12 hours a day, that’s about 25 days of walking if you didn’t encounter any walkers that slowed you down. Do you think that’s possible in the timeline of the show? Read our story below for more details as we try to work everything out. 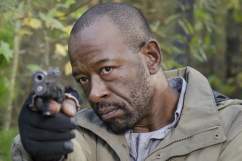