If you’ve just finished watching Black Mirror‘s third episode in Season 4, called Crocodile, you might be wondering exactly why the episode was called Crocodile. And you certainly wouldn’t be wrong to wonder this, since it’s not immediately apparent. We don’t know exactly why the producers named the episode “Crocodile,” but a bit of research can give us a pretty good idea. Read on for more details. This post will have major spoilers for Season 4’s episode “Crocodile.”

Crocodiles Are Known for Their Great Memories

One of the interesting features about crocodiles is that they are known for having great memories. They’re very intelligent creatures and actually quite complex in behavior, Scientific American reports. They have complex social interactions, bond as pairs, and have strong memories. And they can plan. Some have been observed lying partially submerged under egret or heron colonies, holding sticks in their mouths. Birds are tempted to try to collect those sticks for nests, which crocodiles use to catch them. With an episode that’s focused on the fallibility (and implications) of memory retrieval, it makes sense that it would be named after an animal revered for its memory.

GettyA crocodile is seen at the Dinner Key marina after hurricane Irma passed through the area on September 11, 2017.

Perhaps better known, however, is the idea that crocodiles have very thick skin. People are often told to have thicker skin so they can handle the tough things in life and show less emotion. Well, crocodiles have among the thickest skin of all. In fact, crocodile skin is often compared to armor. The exoskeleton is composed of scales that protect it from injury. In the episode “Crocodile,” as you see Mia Nolan get progressively worse, you might consider her an example of someone with skin that is too thick. The insurance agent’s cries, for example, didn’t sway her. The baby didn’t sway her. She became an emotionless crocodile.

But perhaps even more striking is when you think of the term “crocodile tears” in relation to this episode. The term is used to describe someone who’s showing a false display of emotion, such as crying fake tears to pretend they’re grieving. The phrase developed from the belief that crocodiles shed tears while eating their prey (and, in some cases, crocodiles’ tears can indeed be triggered from eating.) There was an ancient belief that this meant crocodiles actually weeped for their victims while they were eating them.

This is very appropriate for the episode. We see Mia shedding tears over her actions. But her tears aren’t enough to ever make her stop or change her ways. She has thick skin, impervious to the pleas of those she’s killing. And her tears are fake in a sense, shed only for herself and not truly for the lives she’s taken. Yes, she is a “crocodile” in many different senses of the word.

Why do you think the episode is called Crocodile? Let us know in the comments below. 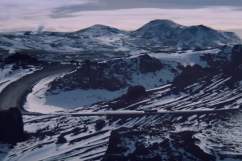