Chelsea Roy is a contestant on The Bachelor 2018 and she is vying for the heart of Arie Luyendyk. Now, before we get into a bunch of spoilers about Roy’s fate on the show, THIS IS YOUR WARNING. If you do NOT want to know any spoilers, STOP READING NOW.

Now let’s get down to business … Roy revealed to viewers that she is a single mother on the first episode of the season, but she made Luyendyk wait a little longer before telling him about her 3-year-old son Sammy. Roy has just one child by her ex Mike Wilson, according to Radar Online, who also says that Roy has been in a “nasty custody war”. And, apparently, Wilson is not too happy about Roy appearing on The Bachelor, as he filed a custody dispute in the State of Maine District Court on September 25, 2017, writing, “Defendant [Roy] quit her job and moved to California on September 16, 2017 to be a part of the ABC show The Bachelor.” Wilson reportedly filed because he no longer wished to pay child support. Click here to read the court documents.

Currently, Wilson pays $450 per week in child support and he said that he would return to paying support once Roy returned from filming. He also stated that, “The show is filming currently and Defendant could be gone anywhere between two and ten weeks or more. The parties son, Samuel M. Wilson, is now exclusively residing with plaintiff, who is fully supporting him. Plaintiff should be relieved of his obligation to pay child support to the defendant, who is in California and not supporting the child at all.” The ex-couple’s original agreement for custody was settled in March 2016.

Prior to becoming pregnant, Wilson and Roy knew each other for 3-4 years, according to OKHereIsTheSituation. And, according to Reality Steve, the couple had issues with infidelity, which reportedly led to their split. After Roy’s son was born, Wilson allegedly started cheating on Roy with former Miss Maine USA, Rani Williamson. At the time, Williamson was reportedly married to a man named Gabe Michelson, with whom she had a 3-year-old daughter. Both Williamson and Wilson have private Instagram accounts, but you can check out the screenshots of their profiles below.

When Roy found out about the alleged affair, the couple broke up. Later on, Williamson and Wilson got married and had their own baby boy together, as reported by Reality Steve. But, infidelity apparently wasn’t the only issue in the ex-couple’s relationship. Just one month before, Roy had filed an order of protection against Wilson, claiming that, “On Feb 9, 2016, defendant came to my property, firmly grabbed and pushed me to release dog from my grip, dragged dog into his truck, came back and damaged side passenger door mirror. He has a history of verbal abuse, intimidation and bullying towards me. Threatening manners.” The order was later dismissed and when the custody agreement was drawn up, both Roy and Wilson were instructed to limit their communications to the subject of their son. Weekly emails were allowed as well.

According to OKHereIsTheSituation, just before Roy started filming The Bachelor, she was dating New England Patriots wide receiver Julian Edelman. She and ex Wilson were never married, but In Touch Weekly reports they were engaged at one point. Unfortunately for Roy, she is not the winner on The Bachelor this season and she doesn’t make it to the final two either. So, it looks like her quest for love continues. 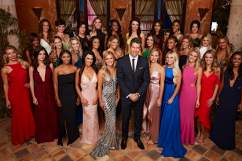