Kourtney Kardashian’s relationship with younger boyfriend Younes Bendjima has been in the media for months. Their dating has also been discussed on Keeping Up With the Kardashians, though Bendjima has not made an appearance on the show. This week on KUWTK, Kardashian talks about a trip to Egypt she plans on taking with Bendjima and she previously posted photos from their vacation on Instagram.

But, the real headline about the couple is that they were rumored to have tied the knot. Gossip Cop reports that OK! Magazine‘s recent cover story titled “Kourtney & Younes’ Secret Beach Wedding!” is completely false. The cover also reads, “After turning down her baby daddy for years, Kourt’s officially moved on.” An alleged insider also added inside the magazine that, “With the world watching for the arrival of her sisters Kim, Khloe and Kylie Jenner’s new babies, it’s been the perfect time for low-key Kourt to sneak under the radar and say ‘I do’ in secret.” The alleged insider added that the couple were married without cameras.

So, where did this story even come from? Celebrity Insider reports that recently, Radar Online reported Kardashian was planning a secret wedding with her beau. An alleged source told Radar, “Kourt just doesn’t want the fanfare of a traditional Kardashian wedding. She wants to marry Younes but would prefer to be just her, him, and a celebrant on the beach, with no cameras around. She’s already floated the idea of doing it at her friend’s beach pad in Punta Mita, Mexico. Younes loves the idea – he’s still not used to the Kardashian circus and quite frankly, Kourtney’s crazy loud mom and sisters freak him out!”

Radar Online also reported that Kardashian and Bendjima have talked children. An alleged source told Radar that, “Kourtney is going to wait until her sisters are all done having their babies to get pregnant. She talked about this with Younes and he is definitely down to try for a baby! He knows that if he gets Kourtney pregnant he will be set for life. And he gets to have a kid!” As Gossip Cop has pointed out, why would Kardashian be in a hurry to get married when she dated the father of her three kids, Scott Disick, for a decade without walking down the aisle together?

Kardashian and Younes Bendjima went to Egypt together over the summer, as reported by People. In tow were friends including longtime PR buddy Simon Huck and a security team. An insider dished to E! about the couple’s trip and revealed, “She is trying to live it up as much as possible this summer and she couldn’t wait to see him again. He planned this adventure for them and wanted to take her somewhere new and exciting. Kourtney was especially to see the pyramids and they had an incredible time doing that. They have enjoyed the beach, rode on camels and fully immersed themselves in the culture and eating the food.” Check out a photo from the couple’s trip in the below Instagram post.

RAIDERS OF THE LOST ARC 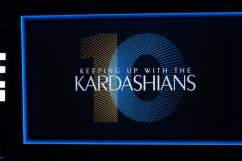 ‘Keeping Up With the Kardashians’ Live Stream: How to Watch Two-Night Episodes Online