At tonight’s Grammy Awards, Anna Kendrick introduced Elton John’s performance with Miley Cyrus. Starting off the performance, Sir Elton began with a rendition of his song “Tiny Dancer”, donning blue crystal sunglasses and an ornate blazer, with a pearl necklace. After the first verse and chorus, Miley Cyrus joined the legend on stage in a beautiful, magenta evening gown. As Sir Elton played the piano, Cyrus took the lead. For the final chorus of the song, John chimed back in to perform a duet with Cyrus. At the end, the two shared hugs and bowed for the crowd.

I. LOVE. THIS. PERFORMANCE. @eltonofficial and @MileyCyrus on stage at the #GRAMMYs… wow, I got chills. pic.twitter.com/6cT8WBmlzq

Elton John recently announced that he will be retiring from touring after he goes on a three-year tour for an energetic farewell. So, what caused the legend to decide on taking this long break? The Mirror reported that after Sir Elton suffered a near-fatal bacterial infection in May 2017, he realized he wanted to take a step away and enjoy life. In an interview with The Sun, Sir Elton confessed, “That is a wake-up [call]. You think you’re completely solid and nothing is going to stop me — and then something like that, which was extremely unlucky. Things happen for a reason. I thought, ‘We made this decision to come off the road, and this has reinforced it. This is someone telling me that, you know, it is about time’.”

When announcing his retirement news, NPR reported Sir Elton saying, “The time is right to say thank you to all my fans around the world and then to say goodbye … My priorities now are my children and my husband and my family … I want to go out with a big bang.”

Tonight, Elton John takes the stage with Miley Cyrus at the 2018 Grammy Awards and it was previously revealed that Sir Elton actually was the one who asked Cyrus to join him in the performance. According to Bustle, the two artists actually “go way back” and in 2013, Sir Elton stated on The Ellen Show that, “I’ve known [Miley] for a long time. She’s a big supporter of the Elton John AIDS Foundation, she’s a terrific girl.” Sir Elton has publicly praised Cyrus’ VMAs performance with Robin Thicke and her album with the Flaming Lips over the years. But, Cyrus is quite the Elton fan as well.

While promoting her Grammys gig on The Late Show With Stephen Colbert, she and Colbert competed to see who was the bigger Elton fan, according to Access Online. Apparently, Colbert was a part of an Elton John cover band. Check out a clip from the show below.

In just two days, on Tuesday, January 30, 2018, Elton John: I’m Still Standing, which is a live tribute concert where John will receive the Recording Academy President’s Merit Award, will be held, according to CBS. The televised date has not yet been released. Miley Cyrus, along with artists including Kesha, Maren Morris, Chris Martin, Sam Smith, Little Big Town, Miranda Lambert and John Legend will all take the stage to perform some of Sir Elton’s biggest hits. And, in an official statement to The Recording Academy, Neil Portnow, President/CEO of the Recording Academy, stated that, “Sir Elton John is an international music legend who has captivated audiences across generations for more than five decades. His creativity, dynamic presence, and melodic virtuosity have positioned him as a cultural icon, and the Recording Academy is pleased to honor his immeasurable contributions to the music community.”

According to Elton John’s official website, his band, led by guitarist Davey Johnstone, will serve as the house band for the event. Sir Elton has a long history with the Grammys and Recording Academy. In 1999, he was the recipient of the Grammy Legend Award. 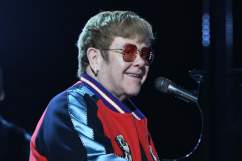 Grammys 2018 Performers: Who Is Performing at the Awards?