Despite all the talent on show at the 2017 Grammy Awards it was a former Miss Universe who stole the show. The 2006 pageant winner Zuleyka Rivera, 30, danced on stage with Luis Fonsi to help recreate her role in the video for his hit, “Despacito.” Rivera became an instant hit with fans when she hit the stage wearing a bedazzled bodysuit.

Rivera was crowned 2006 Miss Puerto Rico and moved on to that year’s Miss Universe where she also took home the glory. These days Rivera is based in Miami where she’s a regular host on Univision. After her pageant win, Rivera has been trying to become an actor, studying at the New York Film Academy, appearing in soap operas in Mexico. Rivera also a constestant on Mexico’s version of Dancing With the Stars. Rivera didn’t win, which will shock most who saw her performance at the Grammys. That’s not to even mention Rivera’s clothing line for teens, her fragrances and her swimsuits, ZK. All that, and Rivera is also a single mother.

1. Despite Her Accolades, Rivera Said that It Was ‘Such a Privilege’ to Be at the Grammys

In an interview with Fox News on the red carpet prior to the awards, Rivera told Fox News, “It is my first time at the Grammys. I’m so excited. For me, it’s such a privilege to be here with Daddy Yankee, Luis Fonzi. It means everything [to me].”

Rivera was one of the many women who responded to Daddy Yankee’s social media challenge to promote his single. Rivera’s Instagram clip of her dancing to the tune in front of a mirror has garnered nearly two million page views.

Despite the social media success of Rivera’s performance at the Grammys, USA Today ranked it number ten on their “Brutally Honest” review of the show.

Shortly after being crowned Miss Universe, Rivera famously fainted. In an interview back in 2006, Rivera said, “What happened was that it was hard to breathe and the dress was very tight and weighed a lot.” Rivera tackled rumors that were going around saying that she fainted due to lack of food, “I eat very well. My nutritionist ordered me to eat six times a day.” The fainting was chalked up to the heat caused by the lights, the rush of winning and her dress being made entirely of metal chains.

In the same interview it’s mentioned that Rivera spoke entirely in Spanish during the pageant. Rivera said, “Spanish is an extremely romantic language that can make any person fall in love with you. And that’s what I wanted to create with the jury; to be able to make them fall in love through my native language.” Rivera also said that if Puerto Rico was to become a state in the United States, she would “lost the charm of the beauty of Puerto Rico. Puerto Rican beauty… is totally different from American beauty.”

In 2010, Rivera and Dallas Mavericks point guard J.J. Barea were first announced as a couple. ESPN reported that the couple were first seen publicly together at Jason Kidd’s Charity Casino night. The report notes that Barea is listed as being 5-foot-10 while Rivera is listed as being 5-foot-9. Barea told the network that Rivera “has an NBA League Pass now. She watches our games. It’s pretty good, man.”

A few months later, in July 2011, Barea and Rivera announced that they were expecting a child together. Barea said at the time, “We appreciate everybody’s support and affection that we have received, and we ask that you give us private time to enjoy this addition to our family.” The pregnancy meant that Rivera left her role in the Mexican soap opera Corazon Apasionado. Rivera gave birth to their son, Sebastian Jose Barea Rivera in Minnesota in February 2012.

In April 2013, Barea released a statement that said the couple had broken up. The press release, via El Nuevodia, read in part, “Zuleyka and I have not been together for some time. Even so, we have maintained a healthy communication for the sake of our beloved son. I admire and respect Zuleyka as a woman and mother of my son, and that will always be the case. We are both adults and mature and that is why I trust that first of all, our priority will be the welfare of our son, and secondly, the success of our careers.” 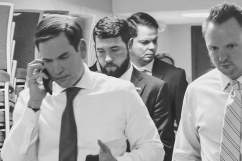 4. Rivera Says She Left Somewhere That She Wouldn’t Named Because of the Sexual Harassment She Suffered

In a November 2017 interview with Suelta la Sopa! on Telemundo, Rivera spoke about the sexual harassment she suffered, via People Magazine, “That’s why I left a specific country that I’m not going to name.” Rivera continued, “I left because I believe in me, in my talent, as far as I have come and what I have coming.” Rivera did not go into specific details about what happened but said, “[There is a] lack of respect for women. You have to value yourself and stand your ground.”

Back in March 2017, Rivera says she fell victim to cyber bullies who criticized her glamorous look. Her response was to post a video wearing a robe and no make-up. Rivera says in the video, “I feel indignation, frustration, and shame to know that there are women who think that you need to have a specific beauty stereotype in order to win someone’s heart and love… Life will teach all those girls, through experiences, the true meaning of beauty.”

5. Rivera Says Her Swimsuits Designs are for Curvy Latinas

Rivera told People Magazine’s Spanish edition that her ZK swimsuit line is designed for curvy latinas. Rivera said, “I don’t like to offer the same thing that you see people wearing in the street. I like to offer things you may see on a fashion runway, that look elegant but also make you feel sexy.” On her official website, Rivera says of her swimsuit, “Zuleyka worked hand on hand with a talented team of professionals and experts in the field of fashion to bring her ideas to create the perfect swimsuit garment with a sexy style that surrounds and tightens the body to mold the figure of any woman.”