When is McDonald’s Szechuan sauce returning? That’s been the big question with Rick and Morty fans ever since the company promised to bring it back “sometime this winter.” Now we finally know that it’s likely coming back on February 26 in some locations and should be everywhere by March. Yes, McDonald’s is finally keeping its promise and bringing back the beloved Szechuan sauce after it suffered a pretty big fallout of Jerry proportions during the limited release on October 7. Sources say the sauce will be available at the end of February, but it may not be rolled out simultaneously at all locations. Here’s everything we know so far about the new Szechuan sauce release. McDonald’s hasn’t made an official announcement yet, as of the time of publication, but the details have been leaked by numerous employees and others connected to the chain, including a source who talked directly to Heavy. Some of the information is conflicting, so we’re compiling everything we know below. The information is tentative until McDonald’s makes an official announcement, as plans can change at any time. But it looks like fans won’t need to go quite as crazy as Rick trying to get to their beloved sauce this time around. This is a developing story and we will update it as soon as more information is available.

The Szechuan sauce is already being delivered to McDonald’s stores around the country, and it looks like the sauce cup design has changed from the one-day-only release in October. A source close to McDonald’s talked to Heavy about the release, but requested to not be named. They shared a photo of a stack of Szechuan sauces arriving at one store, with 250 sauces in each case. The full order was a total of six cases, amounting to 1,500 sauces arriving at just one restaurant.  In order to remove identifying information, Heavy cropped the photo that the source sent, just showing closeups of the boxes that arrived. As you can see, the Szechuan sauce cups that are arriving are good through May 2018.

Although the sauce is not available for sale yet (and likely won’t be until February 26 at the earliest — see the section below), some lucky customers and employees have tried the sauce already. One Redditor, kittyninetails, shared the photo below and said the sauce was “not as spicy as I would have liked it to be tbh.”

But not everyone feels that way. Redditor TheThrowAway2400 shared the photo featured at the top of this story and wrote: “It’s amazing! It tastes like bbq, honey, and teriyaki mixed together.”

A customer posted on Reddit that they were able to try the sauce already. But they didn’t like it. “I did eat it and honestly I did not like it it’s kind of gross.” Another person also wrote that they tried it, with photo proof, and said: “It’s not very good. People won’t like this.” No one has said yet whether the sauce tastes the same as what was released on October 7.

Some customers are saying that if you ask nicely, you might be able to get a sauce packet to try before the official release. But keep in mind that many restaurants won’t do this, since alleged promotion handouts are telling restaurants not to release the sauce early in order to avoid complaints.

Here’s another photo shared by Redditor PhillyBillips, showing the cases of sauce at a warehouse: 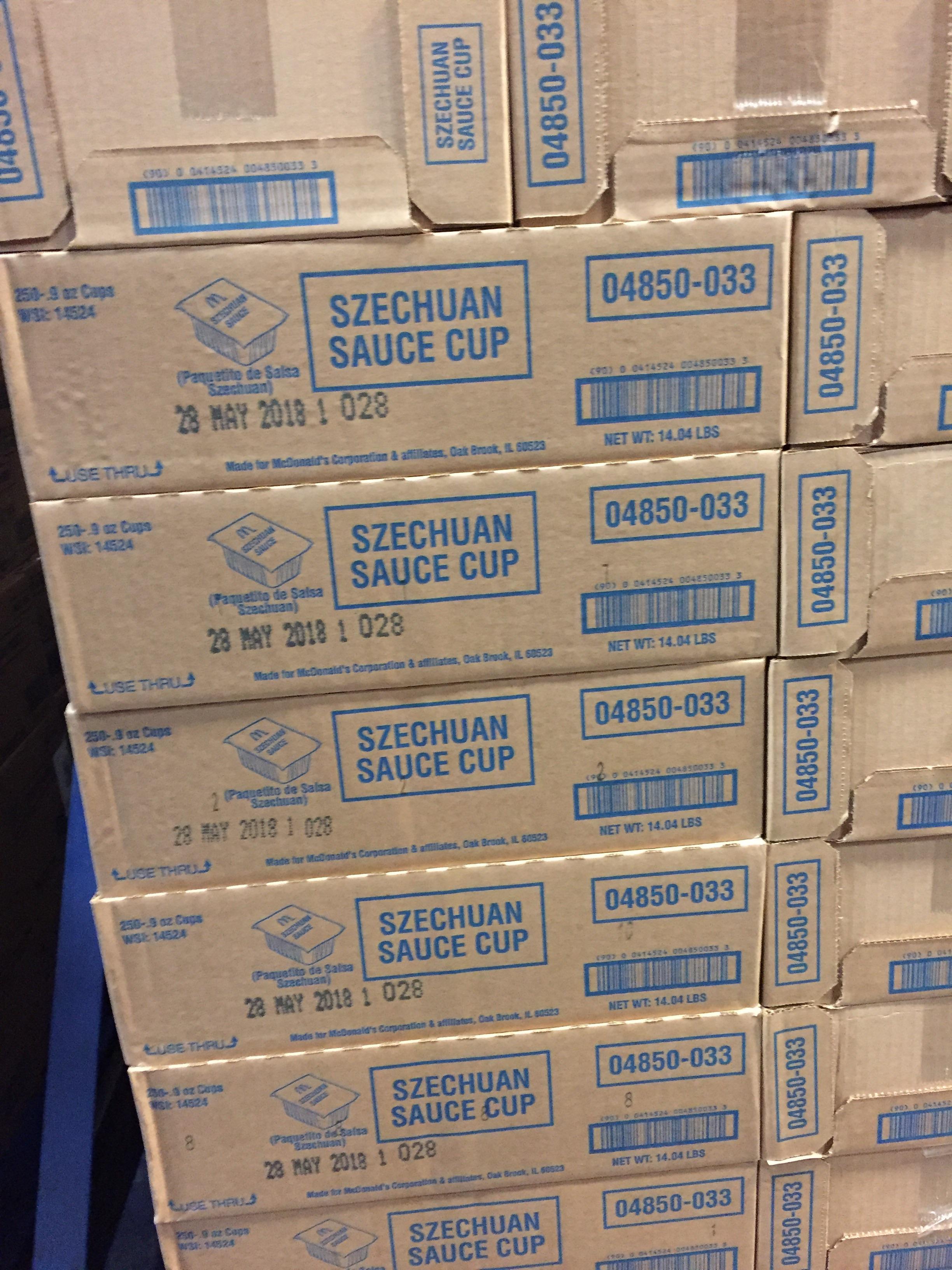 The Sauce May First Be Available on February 26

The release date for the Szechuan sauce has been a source of debate. According to materials shared by McDonald’s employees, promotion will begin on February 26. It’s unclear if this date is the time that advertising begins or if it’s the time they’ll be for sale, but it appears that at least some locations will begin selling it on that day, according to a similar document also shared on Reddit. McDonald’s has not yet made an official announcement about the date, and we’ll update this story as soon as more details are available. If you’ve seen the date February 22 shared in some locations, that’s a misunderstanding because some locations are updating their menus and registers on that day, but it’s not available yet.

So, it looks like at least some McDonald’s locations will have the sauce available starting on February 26. On Reddit, darkangel_401 shared the photo above, which was provided by an employee. And Redditor BULLZEYE420 shared the exact same information, except received by email, and wrote: “This is literally from an email I got from NABIT. I am a Project manager for a Mcdonalds owner operator. We get a document like this for all rollouts of new products and promotions.”

According to the promotion information, each restaurant will receive six cases of 250 sauces each, and Walmart locations will receive three cases of 250 sauces each. The printout reads: “Restaurants will be receiving a limited supply of Szechuan dipping sauce for Chicken McNuggets and Buttermilk Crispy Tender.” It also states: “This is a one time shipment and no product is available for reorder.”

The handout emphasizes: “DO NOT USE PRIOR TO ADVERTISING ON FEBRUARY 26. Using a product prior to the advertising date may cause restaurants to run out of sauce prior to the promtoin and could result in customer complaints.”

Under the headline “What are the benefits?” the printout reads: “Generate excitement and customer traffic for Chicken McNuggets and Buttermilk Crispy Tenders by bringing back the very popular Szechuan dipping sauce for a limited time.”

Under the section: “How do I get started?” the printout suggests to activate the menu keys, accept delivery of the sauce, hold it in a secure location until February 26, train service crew to be aware of the promotion, and complete a product outage to remove the sauce from the app and kiosk once they run out. The printout also reads: “If a restaurant runs out the crew should say – Sorry we have sold out and will not be getting any additional sauce – would you like to try our Signature Sauce or any of the other dipping sauces?”

Heavy’s contact said they heard sauce should be available nationwide by the end of March. So if your location doesn’t have it by the 26th, don’t give up hope.

Although some resources are stating that the sauce will be released everywhere on February 26, others are saying that major markets will get it first and then others will follow. Some big Rick and Morty fans have already contacted their local McDonald’s locations in smaller regions and talked to managers who had no idea the sauce was coming back at all. Redditor FutureDrMadi shared this photo of a calendar from their store above, and the calendar reads on March 5: “Szechuan Sauce in stores!” However, the Redditor later wrote: “I asked my manager about it, available late February through March, possibly April.”

Redditor Samster7680 said their store in Iowa was just putting up advertising on February 26 and wouldn’t start selling it until February 28. Another Redditor wrote that they thought the same thing was happening in their region, and the official sell date wasn’t happening until February 28 in the West Virginia/Pittsburgh area.

Heavy’s confidential source said the sauce may first be released in major markets, like LA, NYC, SLC, SEA, JAX, ATL, and the like. By the end of March, the sauce should be released nationwide in all stores, according to what they had heard. “It will take time for all the Distribution Centers to receive it and filter down to the stores… The major markets will get it first, then it will get to rural markets.”

The Sauce May Be Available in a Limited Supply of 1,500 Sauce Cups Per Location

Here’s a photo from another register:

Reddit/Hikaru-WolfThe sauce shown on another register menu at a McDonald’s.

To put this in perspective, the Redditor who released the advertising printout about the Szechuan sauce said that they work at a large store in a 4 million location, and they only go through about two cases of BBQ sauce a week — and that’s their most popular sauce. So six cases total may be low, but for some less populated locations it’s really not that bad.

Still, given how popular the sauce was during the last one-day-only release, you should go early if you want to make sure you don’t miss the sauce. One Redditor, Reus958, wrote: “My store is being given 6 cases at 250 pieces each. We only serve about 900 customers a day, but given the two high schools near by and the employees being likely to steal or buy a ton, it probably won’t last that long.”

Heavy’s source wasn’t so sure about the limited time nature of the offer. They said: “It will not be a limited release, looking at the box, it has a dedicated WRIN (Inventory Number) so it’s going to stick around for a little while.”

So the limited release part remains to be seen. Consider calling your nearest McDonald’s location on February 26 to see if the sauce is available yet. 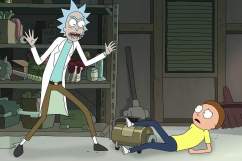 Once It’s Available, You Can Get the Sauce with an Order of Nuggets or Tenders

If you want the sauce, you’ll have to order Chicken McNuggets or Buttermilk Crispy Tenders in order to get it, similar to the one-day-only promotion from October. Promotional handouts from restaurants are showing that customers can choose the Szechuan sauce as their sauce option with either of these items. According to one handout shared by a Redditor, once the sauce is available, you might be greeted with this message when you visit McDonald’s: “Welcome to McDonald’s. Would you like to try our limited time Szechuan Sauce with an order of Buttermilk Crispy Tenders?”

Considering how insane the one-day-only Szechuan sauce release on October 7 was, you probably should try to get to McDonald’s within the first couple days of the sauce’s release in your area. But let’s keep this in perspective. In October, each store only got 20 to 40 sauce packets, leaving many, many people disappointed after they stood in line for hours. This time, restaurants might be getting 1,500 sauce cups if current information is accurate.

The whole October event was so crazy and the bad press for McDonald’s got so severe that the chain apologized and promised to bring the sauce back sometime this winter. Their tweet on October 8 read: “Szechuan Sauce is coming back once again this winter. And instead of being one-day-only and limited to select restaurants, we’re bringing more — a lot more — so that any fan who’s willing to do whatever it takes for Szechuan Sauce will only have to ask for it at a nearby McDonald’s.”

The day after Christmas, McDonald’s said it still planned to release the Szechuan sauce everywhere and would be serving it again “soon.” On Christmas Day, an alert Rick and Morty fan wrote on McDonald’s original tweet that no one had seen the sauce yet. McDonald’s responded: “We’re still moving sauce through portals, but we’ll be finished soon! We won’t make you wait nine seasons for Szechuan Sauce.” On January 2, McDonald’s confirmed again that it was on the way, but not ready quite yet.

Winter doesn’t end officially until March 20, so it looks like McDonald’s is keeping its promise. If you just can’t wait, you can try a copycat recipe. Learn more in Heavy’s story here.

This is a developing story and we will update this as more information is available. Let us know what you have heard in the comments below. 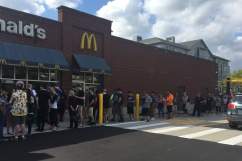