Tonight is the 2018 Academy Awards, aka The Oscars, and The Shape of Water leads with 13 nominations. It is one of the biggest nights in entertainment and A-listers from across the globe are coming together for the big event. Below you can find all the details on what to expect tonight, the nominees, what channel to watch, the red carpet times, live stream details and more.

TV CHANNEL: The awards show airs on the ABC Network. Find access to the ABC channel finder and locate your local station here.

LIVE STREAM: If you would like to watch the show for free online via live stream, you can find live stream options here. We have also gathered live stream information for all the red carpet specials, which can be found here.

SHOW HOST: Jimmy Kimmel returns to the show for his second consecutive year as host. According to the NY Times, Kimmel will be bringing up the #MeToo and Time’s Up movement in his opening monologue. At the same time, Kimmel told ABC News that, “This show is not about reliving people’s sexual assaults — it’s an awards show for people who have been dreaming about maybe winning an Oscar for their whole lives. And the last thing I want to do is ruin that for someone who is, you know, nominated for, you know, best leading actress or best supporting or best director or cinematographer or whatever, by making it unpleasant.” He added that he also won’t be able to stop people’s bad behavior with his “bad jokes.”

LOCATION: The show is taking place this year at the Dolby Theatre in Hollywood, Los Angeles, California. This is a common venue for the event, which is usually held in February, but this year, there were scheduling conflicts with the Winter Olympics. And so, the show was moved to March 2018.

BEST ACTOR, ACTRESS & PICTURE NOMINEES: The nominees for Best Picture this year are Call Me by Your Name, Darkest Hour, Dunkirk, Get Out, Lady Bird, Phantom Thread, The Post, The Shape of Water and Three Billboards Outside Ebbing, Missouri. Those nominated for Leading Actress include Sally Hawkins for The Shape of Water as Elisa Esposito; Frances McDormand for Three Billboards Outside Ebbing, Missouri as Mildred Hayes; Margot Robbie for I, Tonya as Tonya Harding; Saoirse Ronan for Lady Bird as Christine “Lady Bird” McPherson and Meryl Streep for The Post as Katharine Graham. 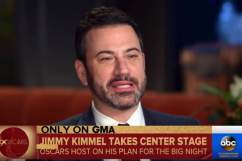 Read More
Celebrities, Oscars, TV
What time is the 2018 Academy Awards on TV tonight? Get the rundown on when to watch the show, what channel to watch and other Oscars details.