Reba McEntire is the host of the 2018 Academy of Country Music Awards, also known as the ACM Awards. She is taking the stage as a host for the 15th time, but she is also a nominee and a performer. For her set tonight, she teams up with Kelly Clarkson to sing the song “Does He Love You”. Clarkson is married to McEntire’s stepson, Brandon Blackstock, which makes McEntire her mother-in-law. Some of the other duets and collaborations that are going on tonight include Kane Brown with Lauren Alaina, Florida Georgia Line with Bebe Rexha, Alan Jackson with Jon Pardi, Toby Keith with Blake Shelton, and Keith Urban with Julia Michaels.

Lauren Alaina has already been announced as a winner at the ACM Awards, as Best New Female Vocalist of the Year. With Kane Brown, she is set to perform the song “What Ifs”. When Alaina found out she had won during rehearsals, she told The Tennessean that, “My heart did this thing that it’s never done before, and I couldn’t breathe, and I couldn’t speak and I was crying. I’m a crier, but I can usually still talk. I could not form words.” Alaina finished in second place to Scotty McCreery on American Idol in 2011 and her career grew from that moment forward.

Brett Young also was revealed as a winner prior to show time, as was the band Midland. Young is the recipient of New Male Vocalist of the Year, while Midland is taking home Vocal Group of the Year. For Young’s performance, he is singing the song “Mercy.”

Florida Georgia Line and Bebe Rexha are performing their song “Meat to Be” at the awards, while Blake Shelton was photographed rehearsing “Should’ve Been a Cowboy” with Toby Keith. during rehearsals, Alan Jackson and Jon Pardi were recorded rehearsing “Chattahoochee”, according to CBS as well. Keith Urban and Julia Michaels are singing “Coming Home” together.

Carrie Underwood has been missing from the spotlight for five months, since she reportedly had a “hard fall” on her property. Her injuries included her wrist and her face, which reportedly needed over 40 stitches. When the injury first occurred, she wrote on Instagram that, “In addition to breaking my wrist, I somehow managed to injure my face as well. I’ll spare you the gruesome details, but when I came out of surgery the night of my fall, the doctor told Mike that he had put between 40 and 50 stitches in.” Mike is Underwood’s husband. Tonight, Underwood will perform her recently released single “Cry Pretty”.

This will be Underwood’s first performance since her injury in November 2017. Another performer who shied away from the stage for a little while, was Jason Aldean, who was on stage at the Route 91 Harvest Festival, when a devastating shooting took the lives of 58 people and left 851 injured, as reported by Rolling Stone. According to The Boot, the 2018 ACM Awards will open with a tribute to the victims of the festival, and Aldean was one of the major artists consulted for the performance. Show executive producer Barry Adelman said that, “We took his lead, of what he felt, and the people around him.”

As for why the tribute will take place at the top of the show, co-executive producer RA Clark explained, “This is the elephant in the room. We are going to address it right at the top of the show … I feel like we found the appropriate voices to put to it. Then we have to get into our show — not leave it behind, but focus on what’s ahead of us,” according to Billboard.

Jason Aldean is set to perform his song “You Make It Easy” tonight and he is also a nominee. Other performances scheduled for tonight include Dierks Bentley performing “Woman, Amen” and there are reports that he could be involved in the tribute. Luke Bryan is slated to perform “Most People Are Good,” Lady Antebellum will sing “Heart Break”, Chris Janson is singing “Drunk Girl,” Maren Morris will deliver her song “Rich” and Thomas Rhett will perform “Marry Me”. Additional performers include Kelsea Ballerini, Kenny Chesney, and Miranda Lambert. 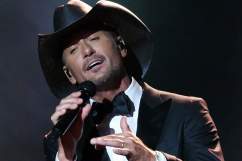