Jesus Christ Superstar Live is a production on NBC, with stars like John Legend, Alice Cooper and Sara Bareilles participating. The show is a rock opera that is loosely based on the last week of Jesus’s life, starting with his arrival and ending with the crucifixion. It also depicts the struggles between Judas Iscariot and Jesus Christ.

Like several of Dixon’s co-stars in the project, he comes from a religious background, telling the NY Times that, “I grew up in the Episcopal Church, went to private school in that church, went to chapel every day. It was a constant through my adolescence. Then we started to shift, to the Unitarian church. Now, spirituality plays a role in my life, but not religion. For me religion is a political construct, and spirituality is a community construct, and there’s a real difference.” And when it comes to what Dixon says he’s learned from his role in Jesus Christ Superstar Live, he says that, “Judas is far less culpable of the things that he is accused of than people assume. Judas feels acutely a perversion of the message, and he also feels the danger of the message getting out of control — of dedication and love and unity and community turning into fanaticism and zealotry.”

According to NBC, Brandon Victor Dixon will play the role of Judas, “an apostle of Jesus who has concerns for the poor and the consequences of Jesus’s popularity.” Prior to taking on the role, Dixon actually won a Tony award in 2014 as a producer of the Broadway show “Hedwig and the Angry Inch,” which won the award for Best Revival of a Musical. In 2006 he was also nominated for Best Featured Actor in a Musical for his role as Harpo in the show “The Color Purple,” and also in 2016. NBC’s bio on Dixon states that Dixon, “currently co-stars as Terry Silver on the Starz hit series Power. He most recently starred as Aaron Burr in “Hamilton” on Broadway. Previous Broadway credits include: Eubie Blake in “Shuffle Along” (Tony Award nomination), Berry Gordy in “Motown the Musical” (Grammy and Drama League Award nominations), and Harpo in “The Color Purple” (Tony Award nomination). National tour: Simba in “The Lion King.” Off-Broadway: “F**king A,” “Rent” and “The Scottsboro Boys” (Lucille Lortel, Drama League, Outer Critics Circle and Laurence Olivier Award nominations). Television: One Life to Live, Law & Order: Criminal Intent, and The Good Wife. Dixon was raised in Maryland and is a graduate of Columbia University.”

Dixon’s role in Jesus Christ Superstar Live is important because the story actually told from the perspective of Judas. One of the things that Dixon said he’s really tried to make a point with is embracing the meaning of the story itself. Dixon told Billboard that, “I’ve been trying to focus less on the vocals and more on the words. The words expressed in this story are very specific and shape the vocals. I’m excited because it’s rock music. I knew it would have me up on my higher notes, but I’m not intimidated. According to the New Testament, Dixon’s character Judas was one of the original twelve disciples of Jesus Christ.

Jesus Christ Superstar Live takes place at the Marcy Armory in Williamsburg, Brooklyn, New York. Tune in to NBC at 8 p.m. ET/PT and 7 p.m. CT for the live production. 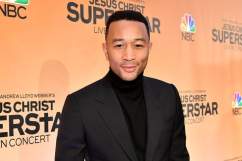