Prince Louis of Cambridge is the newest member of the British royal family. The Duke and Duchess of Cambridge welcomed Louis on April 23. Duchess Kate arrived at St. Mary’s Hospital in the morning hours, according to a tweet from Kensington Palace.

The baby’s full name is Prince Louis Arthur Charles. He’ll be known as His Royal Highness Prince Louis of Cambridge, the palace announced on April 27.

The Duke and Duchess of Cambridge are delighted to announce that they have named their son Louis Arthur Charles.

The baby will be known as His Royal Highness Prince Louis of Cambridge. pic.twitter.com/4DUwsLv5JQ

The name Louis means “renowned warrior.” According to People Magazine, the name is a nod to Queen Elizabeth’s husband, Prince Philip, whose grandfather was Prince Louis Alexander of Battenberg.

“The royal baby’s middle names of Charles and Arthur also hold special meaning. Charles, of course, is in honor of the baby boy’s grandfather, Prince Charles. And the name Arthur is a family tradition. Both dad William and grandfather Charles have it as a middle name,” People reports.

Prince Louis was born on April 23 at St. Mary’s Hospital. He weighed 8 pounds, 7 ounces at the time of his birth. Kensington Palace made the official birth announcement on social media just before 8 a.m. Eastern.

A few hours later, the Duke and Duchess of Cambridge introduced their new baby boy to the world. Prince Louis’ mom was wearing a knee-length Jenny Packham red dress as she held her newborn and waved to the cheering crowd. At the time, the couple hadn’t announced the child’s name.

You can see Louis’ debut in the video below.

The Duke and Duchess of Cambridge left the hospital on Monday evening, bringing their newest addition home to Kensington Palace. They have been readjusting to life as a family of five ever since.

2. He Has an Older Brother Named George

Prince George, whose full name is George Alexander Louis, was born on July 22, 2013. He was named after Queen Elizabeth’s father, King George VI. His middle names, Alexander and Louis, also have special meanings.

“Alexander is believed to have been picked by the couple to honor the Queen, whose middle name is Alexandra. Louis is likely a tribute to Prince Philip, whose grandfather was Prince Louis Alexander of Battenberg,” People Magazine reports. His official title is His Royal Highness Prince George of Cambridge.

Prince George is the epitome of a little boy. According to Prince William, George is “obsessed by the police,” and loves playing with police car toys.

“He is obsessed, actually, by the police… cars, toys, everything,” Prince William told PC Jayne Richardson last month, according to the Daily Mail.

3. He Has an Older Sister Named Charlotte

Princess Charlotte was baptized at St. Mary Magdalene Church in Sandringham, on July 5, 2015. Her godparents are The Hon. Laura Fellowes, a cousin of Prince William, Adam Middleton, a cousin of the Duchess of Cambridge, and family friends, Thomas van Straubenzee, James Meade, and Sophie Carte,” according to BBC News.

When she was just nine months old, Marc Jacobs named a lipstick shade “Charlotte” after her.

“The ‘Charlotte’ lipstick is part of the Le Marc lip créme collection and is a deep pink rose shade exclusive to Harrods in London. It goes for $34 a piece,” Elle Magazine reported at the time.

In January 2018, Princess Charlotte started preschool at Willcocks Nursery School. On April 23, 2018, she was promoted to big sister.

Despite being the second child for the past two years, Charlotte has made it known that she is “the one in charge,” according to Duchess Kate. Last year, the Duchess chatted with a fellow mom at the unveiling of a special war memorial.

“She said that Charlotte is growing up really fast. She is the one in charge,” Samantha Burge told reporters. “We have both got 2-year-olds and they are ruling the roost. It was a bit of a mummy chat,” Burge added.

Now that Charlotte has a little brother, it will be interesting to see how the family dynamic changes. Since she remains the only girl, she may continue to be sassy and show her brothers who is boss.

And while Charlotte may now be the middle child, she hasn’t lost her spot in the line of succession. This is the first time in history that a female heir didn’t fall back in the line.

“[In 2011], legislation was passed to change [the law of succession]. Now, under the Succession to the Crown Act of 2013, the line to the throne is determined by birth order, regardless of sex. So, the fact that Princess Charlotte remains fourth in line, while her younger brother becomes fifth in line, is a first for the British royal family,” according to The Cut.

4. His Uncle Harry Is Getting Married Next Month & He Might Attend

The newest royal baby already has a big event on his social calendar. Louis’ Uncle Harry will marry his bride-to-be, Meghan Markle, on May 19. At that time, Louis will be less than one month old.

It is unknown if the Duke and Duchess of Cambridge will bring their newborn son to the royal wedding, which is set to take place at Windsor Castle in England. Although the full bridal party has not been announced, many expect to see Prince George and Princess Charlotte as part of the ensemble.

If the Duke and Duchess do not bring the baby to the royal wedding, he may stay at home with a nanny, or with Duchess Kate’s mother, Carole. Over the years, Carole Middleton has been instrumental in helping out with her grandchildren.

5. He Is in Line to the Throne, but It’s Unlikely He Will Ever Become King

While Prince Louis will be in line to the throne, he most likely won’t become king, simply because of the line of succession.

When Queen Elizabeth dies, her son, Prince Charles, will take the throne. Next in line, is Charles’ son, Prince William. When Prince William passes away, his oldest child, Prince George, will succeed him. Following Prince George’s reign, his younger sister Charlotte, will become queen. Prince Louis will follow Princess Charlotte, but will only become king if his brother, George, doesn’t have any children of his own. Prince George’s future children will become king or queen before Princess Charlotte.

Just as a mental note, the line of succession puts Prince William’s brother, Prince Harry, sixth in line. If the Duke and Duchess of Cambridge have a fourth child, he or she would be sixth, and Prince Harry would move to seventh. 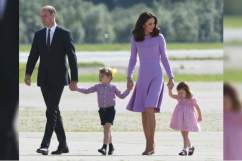