Ronnie and Sammi were an item for all of the original Jersey Shore show. Now, it’s 2018 and Sammi “Sweetheart” Giancola has decided to not participate in the show’s reboot, while Ronnie Ortiz-Magro is full steam ahead. Both Magro and Giancola have moved on in their lives, especially when it comes to romance, but they were together for years, both on and off the show. Let’s break down their relationship over the years, from the fights, to the break ups, bringing us to where they are in their lives today.

Ronnie and Sammi From “Jersey Shore”

When Giancola first set foot in the Jersey Shore house, she was the focus of cast member Mike “The Situation” Sorrentino. The two started to get to know each other and even made out. But, on one night at the club, Giancola and Magro started dancing together and one thing led to another. Sorrentino was visibly upset, but that didn’t stop the two love birds from getting into a relationship. Soon into the relationship, when Giancola spotted Magro dancing with someone else while they were out together, she decided to have revenge and give her number to another guy. This blew up in her face and resulted in a major fight, which was one of many.

Moving on to season 2, the couple had been off and on, but Magro was still coming home to Giancola after nights out in Miami. While at the club, he was making out with other girls. Several of the roommates felt guilty keeping Giancola in the dark, so cast-mates Snooki and JWoww decided to write Giancola an anonymous note, details all of Magro’s indiscretions. The reveal rocked Giancola and she had a lot of difficulty forgiving Magro, but she did. Unfortunately, her distrust and resentment carried over into season 3, when the group returned to Seaside Heights, New Jersey. And, who could forget the episode where Magro destroyed Giancola’s bed and trashed all of her belongings, prompting her to break up with Magro and leave the shore house?

The fights continued, but seemed to dull down for a bit by season 4, when the cast went to Italy. By the end of the series, Giancola and Magro had tamed their relationship (for the most part) and their fellow cast members definitely noticed.

What Happened to Ronnie and Sammi After “Jersey Shore”

The Jersey Shore couple started dating in 2009, but they ended up calling it quits in 2014. At the time of the break up, E! has reported Magro saying that, “We were drifting apart and not really spending any time together. I still care about her. She’s a great girl, but we were growing distant. It was for the best.” By 2016, the couple was back together and celebrating milestones together. But, their happiness together didn’t last long, because, by the end of the year, they had broken up again.

On her podcast “Just Sayin’,” Giancola explained the reason for the final break up, saying, “Something happened in the relationship that I was in and I left because of, I guess, some dramatics. It just, the relationship fell apart and I left. Just letting everybody know. I kind of grew up and realized I would be happier single so I left the situation and I’m happy right now.” Giancola went on to say, “Everybody knows my relationship with Ron so we broke up, obviously in May, because things were not working out and I left. And I will always love Ron and we always had like, he was somebody I was with my whole 20’s but it’s just better off that we’re not together cause it’s really up and down and it was a crazy ride always. So I left and I’m happier now. I’m doing really well and dating, having a good time and I’ve been single since May so this is nothing new for me.”

When Giancola appeared with some of her Jersey Shore cast-mates in 2017 on the E! special Reunion Road Trip, she briefly discussed Magro, saying, “That door is closed and will remain shut for a long time.” Magro was not present for the special, but he did appear on the reality show Famously Single and talked a bit about the wrong he did while dating Giancola. At one point, he wanted to speak with her, but she reportedly did not want to make that happen. Giancola explained on her podcast that, “I like to keep things private … this is also something I want to address. People saw me do a Distractify interview where I was like, ‘Oh it’s disappointing that he was doing a show,’ and I just want to clarify that it was a little bit disappointing because I am so private so the fact that I thought he was doing a show to possibly air out our relationship was not cool. So I thought that was disappointing so I just want to like clarify that. But other than that, it is what it is and I wish everybody well …” On Famously Single, Magro started dating Khloe Kardashian’s known BFF Malika Haqq. That relationship lasted a couple months.

Currently, Giancola is dating a man named Christian Biscardi, and the two are not shy about showing off their love for each other on their Instagram accounts. And as for Magro, he recently welcomed his first child, with girlfriend Jen Harley. It doesn’t look like Giancola and Magro will ever get back together and JWoww recently weighed in on the possibility as well, telling In Touch Weekly that, “They have both moved on — the show was so long ago now.” RIP, Ronnie and Sammi. 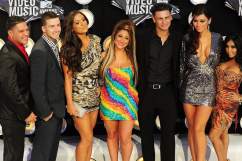 Read More
Jersey Shore, MTV, Reality TV, TV
Get the rundown on the Ronnie Ortiz-Magro and Sammi "Sweetheart" Giancola dating timeline, from the Jersey Shore fights, to the break ups to now.