This season on Southern Charm, Thomas Ravenel has brought his new girlfriend Ashley Jacobs into the mix. She moved across the country, from California, after working as a nurse, to be with Ravenel, in what seemed to be a quick-paced relationship. The mother of Ravenel’s children, Kathryn Dennis, was unaware of the relationship, according to her, until they were shown meeting for the first time on Southern Charm. At this point, Jacobs had already moved in with Ravenel and had been spending time with their kids.

On a trip to the resort town of Hilton Head, the cast of Southern Charm got to know Jacobs a little better and they, reportedly, were not fans of hers. Patricia Altschul had taken her under her wing and Ravenel’s friends appeared to be cordial to Jacobs, but she soon began to rub some of the cast members the wrong way.

Ravenel and Dennis had agreed that Jacobs would not be invited to their son’s birthday party, but Jacobs was not having it. She confronted Dennis in front of their fellow cast members in Hilton Head and the confrontation erupted into an argument fueled by Jacobs. The fire continued to spread and cast members came to the defense of Dennis. Danni Baird was one of the more vocal defenders, telling Jacobs to “slow her role”. Cast-mate Craig Conover also previously told Ravenel to be careful, fearing that Jacobs is a gold digger, and Naomie Olindo has called Jacobs “crazy”.

In other scenes, even some of the most diplomatic cast members voiced their disdain for Jacobs. And, as the show continues to air, some of the stars have taken to Twitter to voice their concerns and true feelings about Jacobs, as well as their love for Dennis.

Shepard “Shep” Rose was filmed saying that he hates Jacobs on an episode of Southern Charm. Even so, he recently decided to take a selfie photo with Jacobs, explaining that it was to hopefully calm some of the hatred being thrown her way. Rose then ended up getting some of the hate as well, just for posing in the pic. His explanation was that, “I was just trying to quell some of the hatred. It bred more. Cest La Vie … We all had Kathryn’s back. I continue to do so. But social media can be really harsh and i ran into her yesterday and she seemed a little shell shocked. So i thought I’d supply a little support. I try to have as much empathy as possible.” At the same time, he put down Jacobs for the way she spoke to Dennis when confronting her. Rose wrote on Twitter that, “I was very unhappy with how she spoke to Kathryn. We all were. And we were proud of how Kathryn handled it. She’s come a long way.”

Over the years, Patricia Altschul has had very firm feelings about Dennis and has had a public distaste for her, but it seems as though her shell has been softening a bit for Dennis, in light of Jacobs’ behavior on the show. Altschul had taken Jacobs shopping to help her fit in with the Charleston crowd, but Dennis’ volatile behavior in the past forced Altschul to keep her distance. Dennis appears to have changed her ways for the better, but Jacobs has been accused of being a gold digger. Recently, Altschul has been retweeting promotional tweets in favor of Dennis and some of her responses to fans on Twitter lead us to believe that she may have changed her mind about Dennis … and about Jacobs, for that matter.

Recently, a user tweeted, “Why were you so eager to style her? I was very confused as to why you were so nice to her but hate on Kathryn. Love you Pat just a question.” Altschul’s response was to “keep watching” the show. Altschul has tweeted out an article called “Ashley Loses Her Sh*t On Southern Charm” and retweeted a post that stated, “’Lawwwd have Mercy!’ Watching Ashley was tacky, trifling, and just all kinds of messy! #PleaseSendHerACopyOfYourBook #TheArtOfSouthernCharm”. She also retweeted a message fellow cast member Shep Rose wrote, making fun of Jacobs’ use of the non-word “romantical”.

Altschul has clearly changed her tune about Jacobs, as have many. When criticizing Jacobs online, Altschul wrote, “Here are the don’ts: ask for a credit card….ask for @LouisVuitton luggage, ask for a ring, ask for a proposal, complain and nag incessantly.” Even Jacob’s boyfriend, Ravenel, told the cameras that she was getting on his nerves.

Jacobs, has taken to social media to defend herself and one Twitter user said that she claimed the show is scripted. Fellow cast member Rose’s response to the claims was, “I’ve never spoken somebody else’s words on TV. I’ve said and done some dumb things. But I take full responsibility (however embarrassing).” 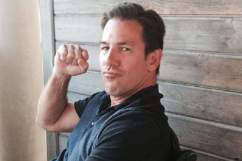 Read More
Reality TV, Southern Charm, TV
Despite all the hate that Thomas Ravenel's girlfriend, Ashley Jacobs, has received on Southern Charm, the two are still together.