The music world was taken aback on Friday, when Nicki Minaj stated that she and Eminem were in a romantic relationship. The news came about after Minaj’s guest verse on the YG song “Big Bank“, where she rapped the lyrics “Back to the back Maybach, stack the M’s/Told ’em I met Slim Shady, bag the M/Once he go black, he’ll be back again.”

Minaj, 35, used the lyric in an Instagram post shortly after the song’s release, and when followers asked her whether she and Eminem were an item, she replied by saying “yes.” Check out the a screenshot of the exchange below.

This is not the first time Minaj has referenced the Detroit rapper in her lyrics, and the two have been professionally involved dating back to 2010.

Here’s what we know about Nicki Minaj and Eminem’s relationship.

1. Minaj Has Cited Eminem As One Of Her Biggest Influences

GettyNicki Minaj arrives for the 2018 Met Gala in New York.

Since arriving on the rap scene in 2009, Minaj (born Onika Tanya Maraj) has been vocal about her musical influences. She’s credited artists like Lil Wayne, Foxy Brown, and Jay-Z with helping inform her style, but none have been more influential than Eminem. Minaj went as far as to call the rapper her role model, and and recount the excitement of working alongside him in a 2010 interview with MTV News:

We went out on a whim and put it in the air like, It’d be great if he would collaborate with us. I remember I kept talking about it, and I thought, It can’t hurt. I sent him one record, and he didn’t love it. He didn’t say, I don’t love it; he just said, Can you send me something that’s a little more me? I sent him an e-mail and thanked him for that, just having enough respect. Sometimes people don’t respond. He had the respect, at least, to treat me like a peer.

Minaj added to her story in a 2017 interview with XXL, saying that every time she wrote a verse and sent it to Eminem, he would send a new verse back. “It was competitive,” she said, “It was fun. I think [he] treated me with a sense of respect as a female MC.”

The song that came out of their sessions, “Roman’s Revenge”, appeared on Minaj’s debut album Pink Friday, and received positive reviews from critics, who praised its lyrical creativity. To date, it is the only song the two have officially worked on together.

2. Eminem Stirred Controversy With A Lyric About Minaj In 2011

Eminem (born Marshall Mathers III) has had a long history of offending listeners and other celebrities with his music. It’s part of the Slim Shady persona. That said, there have been times when even he goes too far, which is what many claimed to be the case with the 2011 song “Fast Lane.” Released as the lead single on his collaborative album with Royce da 5’9″, “Fast Lane” drew backlash for lyrics that referenced Minaj in an overtly sexual way.

The lyrics in question are as follows: “I hope that I don’t sound too heinous when I say this, Nicki Minaj, but I wanna stick my penis in your anus.” Eminem defended his couplet in an interview with Complex magazine, stating that he wasn’t saying anything that everyone wasn’t already thinking.

Eminem performs at Lollapalooza on August 1, 2014 in Chicago, Illinois. (Photo by Theo Wargo/Getty)

“I mean, obviously, I’ve worked with Nicki,” he said, “I did a song with her. She’s a phenomenal rapper, and phenomenal looking. I mean look, it was right there. I thought it was funny.” The rapper admitted that he didn’t consult Minaj about it beforehand, but was confident that “she sees the fun in it too.”

Minaj did see the fun, in fact, and even referenced the lyric on Ciara’s 2013 song “I’m Out.” In it, she raps “Man, f**k you and your lady, gun butt you, cause you’re Shady.” Listen to the song below.

3. Both Have Been Romantically Linked To Celebrities

Nicki Minaj and Eminem have had very public relationships over the years. The former has been linked to a number of artists romantically, including Future, Nas, and her Young Money label mate Drake. Her most serious relationship, however, has been with Philadelphia rapper Meek Mill. The two started dating in January 2015, after working closely on Minaj’s album The Pinkprint, and publicly announced their relationship on Instagram a few months later.

Mill and Minaj broke up last January, after the latter announced that she was single on Twitter. Many have speculated as to why the split happened, with the most popular reasons being Mill’s ongoing feud with Drake and Minaj’s decision to focus on her career. Both released diss tracks aimed at one another in 2017.

Mill’s “1492 Flows” and “Meekend Music” freestyle poke fun at the rumor that Minaj uses ghostwriters, with lyrics like “So when you see me out don’t ask me about no Nicki/F**k I look like, telling my business on Wendy.”

Minaj’s “Regret In Your Tears” takes a more heartfelt approach, with lyrics like “Regret in your tears, now you taste ’em/’Cause you know I don’t chase, I replace ’em” and “I just want the memories, tried to make some with you/Now I gotta erase some with you” highlighting Mill’s romantic shortcomings.

Eminem’s romantic history is littered with similar rumors, including rumors that he hooked up with Britney Spears, Mariah Carey and his 8 Mile co-star Brittany Murphy at various points in the early 2000s. He even references Carey on the 2002 “Superman”, rapping“What you trying be? My new wife? / What, you Mariah? Fly through twice.” Carey has since denied the hook up.

That said, the romantic rumors involving Eminem has lessened since he divorced Kimberly Anne Scott for the second time in 2006. The ex-couple have three children together: Hailie Jade, Alaina Marie Mathers, and Whitney Scott Mathers.

4. Both Have Said They Enjoy Being Single

GettyLONDON, ENGLAND – NOVEMBER 12: Eminem performs on stage during the MTV EMAs 2017 held at The SSE Arena, Wembley on November 12, 2017 in London, England. (Photo by Dave J Hogan/Getty Images for MTV)

Eminem has been forthright when discussing his love life, and the troubles he’s experienced. In a 2017 interview with Vulture, the rapper said: “Since my divorce I’ve had a few dates and nothing’s panned out in a way that I wanted to make it public. Dating’s just not where I’m at lately.” Em went on to say that he’s tried dating apps like Tinder and Grindr, but that part of him enjoys living as a single man. When asked point blank if fame was lonely, he responded by saying “Am I lonely? No, I’m good. Thanks for asking though.”

Eminem also told Rolling Stone that he doesn’t really enjoy dating. “As far as going out, like dinner and a movie – I just can’t. I have trust issues. With women, friends, whatever. You always wonder what their real motives are.” He added: “I’ve got a small circle of friends, and it’s a lot of the same friends I’ve known forever. Right now, that works for me.”

Minaj has also discussed her status as a single woman. While asked about the matter on a 2017 episode of Ellen, she responded by saying: “I’m just chilling right now, I’m celibate. I wanted to go a year without dating any men.”

5. Some Fans Believe The Dating Rumors Are False

Minaj’s Instagram post has received an enormous amount of attention from fans, but many of them believe that her comments were false. According to The Shade Room, some Instagram users questioned the validity of Minaj’s “yes” comment, and Eminem promptly joined in by writing “Girl you know it’s true.” Not content to stop there, Minaj responded to Em with a message that read: “Babe I thought we were gonna keep it on the low ’til the wedding. Yikes. I’ll talk to you when I get home.”

If the rappers are indeed trolling their fans, it would not be the first time. Minaj is notorious for playing up romantic rumors, going as far as to “marry” Drake in the music video for 2010’s “Moment 4 Life” and detailing the raunchy what-ifs of their chemistry on the 2014 single “Only.” She also played coy regarding her relationship with Nas, as they appear to kiss in the music video for 2012’s ‘Right By My Side” and were said to have “sleepovers” together. Neither relationship was officially confirmed.

Some have also speculated that the Nicki Minaj and Eminem romance is being used to drum up attention for the former’s upcoming album Queen. Minaj recently announced that the album will come out on August 10th, and neither of her singles, “Chin Li” and “Barbie Tingz” have proven successful on the Billboard charts. We will continue to update as details regarding her relationship with Eminem are made available. 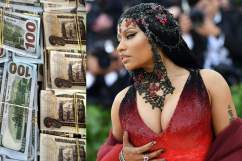