The Broward County Sheriff’s Department has released the arrest report for Dedrick D. Williams, a Florida tattoo artist with a criminal history for auto theft who is accused of murdering the rising rapper XXXTentacion, who was gunned down in his luxury BMW outside a motorsports dealer. You can read that report later in this article.

According to online records, Dedrick Williams, who has a criminal history and flashed wads of cash on social media, was arrested on June 20 by the Broward County Sheriff’s Department.

Less than a day before the arrest was announced, Dedrick Devonshay Williams wrote on Facebook, “Don’t piss me off u will never know wats next ????” He uses the name “Chucky Williams” on Facebook. He was on felony probation through 2021 at the time of XXX’s shooting.

The arrest report provided some additional details about the apprehension of Dedrick Williams.

1. Police Stopped Dedrick D. Williams as He Drove a Honda Accord, the Report Says

Authorities with the Broward Sheriff’s Department confirmed the arrest of Dedrick Devonshay Williams, and they released the arrest report in the case, which you can read above.

“In just more than 48 hours, #BSO homicide detectives arrested Dedrick Devonshay Williams for the murder of Jahseh Onfroy, also known as XXXTentacion. Williams (dob 3/23/96) was taken into custody shortly before 7p.m. in Pompano. More details will be released later today,” The Broward County Sheriff reported on Twitter, along with a mugshot of Dedrick Williams.

According to the arrest report, contact was made with Williams as he drove a 2004 silver Honda Accord by himself. He does not have a valid driver’s license and has a suspended ID card. He was placed in custody on a probation violation, for operating a motor vehicle without a valid license, and for first-degree murder, no bond.

The records accuse Williams of murdering XXXTentacion with “a premeditated design to effect the death of a human being, Jahseh Onfroy” and allege he did “have an active part and did kill and murder by shooting him with a deadly weapon, to wit: a gun.”

Dedrick Williams’ brother posted a video on YouTube and statement on Facebook proclaiming his brother’s innocence after news of the arrest broke. The Facebook post read, “?️ON MY #Z ?❗️ YALL WONT FRAME MY Z.O.M.B.I.E ON ?I Won’t These Crackers Trick My Brother 26 ZHOT??? Chucky Williams Ain’t Kill No One ?????❗️ #1k????????❗️.”

The YouTube video is laden with the N word. The language is extremely disturbing. In part of the video, he says, “Keep my brother’s name out of your mother f*ckin’ mouth, my n*gga. You know what I’m saying. We didn’t plan no games…Mind ya’all business. …F*ckin’ n*gga.”

Police had earlier said that two suspects were seen fleeing the scene of the murder and that one suspect was wearing a red mask. The sheriff’s department had been offering $3,000 for information that led to an arrest in the case. It now appears there may be more than one shooter, although their names were not released yet.

Williams has already appeared in court, where he was held without bond.

You can read more about Dedrick D. Williams here: 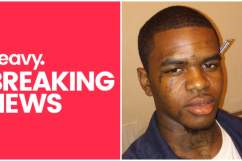